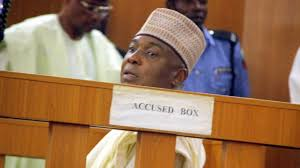 Mr. Wess, who is the Principal Detective Superintendent of the EFCC told the court that his schedule of duties is the investigation of cases assigned him by his superiors. 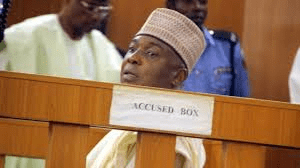 Appearing before the trial Judge, the Witness observed that the defendant was governor of north central Nigerian state of Kwara between 2003 and 2011.

According to the Witness, after his tenure, the Commission received several petitions from different groups. One of the groups was Kwara Freedom Network which wrote several petitions accusing Saraki of abuse of office and misappropriation of public funds.

The petitions were assigned various groups for investigation. He said in 2014, the former EFCC chairman, Ibrahim Lamorde received an intelligence information related to the defendant.

On the basis of the information, Lamorde set up a team of three investigators headed by him, Chris Odofin and Nura Bako.

The team was tasked to investigate the intelligence report. The report was reviewed by the team and in the course of investigation, it was discovered that there are several companies linked to the defendant. Carlisle Property and Investment Company Limited; Skyview Property Ltd; Lin. Tiny Tee Limited and several other companies.

Some of the companies maintained accounts in GTB, Zenith Bank, Intercontinental Bank, now part of Access Bank and other banks.

It was also discovered that the defendant maintained three accounts with GTB- in naira, dollars and pounds sterling.

The accounts were analysed in the course of the investigation. In the naira account, it was discovered that between 2005 and 2013, the account had total inflow and outflow of N4 billion.

Other sources of inflow was massive lodgement of cash by individuals. Some inflow came from Carlisle Property and Investment Ltd.

It was also discovered that inflow into the account was for purchase of property.
Analysis of the dollar account showed that the major source of inflow was from Carlisle Properties which was over two million dollars.

The other part of the fund in the dollar account was changed into 1.5 million pound sterling and wired to UK through Fortis Bank for purchase of property.
From the telex transfer we have and through the confession of the bank, it was suggested that the account belonged to the defendant.

Because of the suspicious nature of inflow into the account, the bank was invited because some of the individuals making cash lodgement into the account were officials of GTB.

One Oluwakodimu reported to the Commission. From our interaction, we discovered that the money lodged into the account was given to him by his superior, Bayo Abdulraheem Dauda who was the relationship manager of the account. Our interaction with Dauda showed that the cash sums were handed to him by the defendant.

He said he used to be called to Kwara State Government House, Ilorin to collect the cash. He then lodged the account in GTB, GRA Ilorin branch. From the lodgement in the account, we discovered that one Ubi on a single day made five lodgements of N77 million in cash.

We invited Adama and he said the cash sums were also handed to him by the defendants and said the sum that was lodged by Ubi in the same account must have been given to him by him. Both of them were PAs to the defendant and Adama said Ubi was working under him.
After a while, the pattern of lodgement changed though still in the range of 600,000 to N900, 000, but different individuals were making the same lodgement in large numbers in the same day.

Further investigations revealed that those individuals were fictitious. The investigation took up the matter with GTB officials, but they said they have done the needful, that is by drawing a report and forwarding it to NFIU. They provided evidence to that effect.

We submitted our investigation report and based on that stated that since there are other teams investigating other petitions related to the defendant, we should harmonise our investigations.
He said Ibrahim Lamorde also recalled that there was a joint team formed in 2006 made up of Code of Conduct Bureau, DSS and EFCC officials. He therefore called the official who represented EFCC in that team-one Mr. Adamu Garba to join our investigation team.

So, all the findings were harmonised and sent to the Legal Department for advice. The Legal Department later informed me that they conferred with Federal Ministry of Justice on the matter and that the Ministry directed that the matter to referred to the CCB and that a joint team of CCB and EFCC be established to conclude the issues and findings in the investigations.

One Mr Samuel Madojeni and Samuel Yahya of CCB were directed to join our team by CBB. They now furnish the team with assets declaration forms filled and submitted by the defendant between 2003 and 2011. We analysed the forms together with CCB officials.

When we discovered that there were a lot of lodgements into the account of Carlisle Property and Investment Ltd, we invited the MD and one Mr Kennedy Sule Izuagbe reported to the Commission.

From our interaction with him, it was discovered that all the transactions in the account of Carlisle | were directed by the defendant.

We requested that Izuagbe furnish us with all the details of property managed by Carlisle Property and Investment Ltd because it was discovered that the major source of inflow into Carlisle Property was rent from their various tenants. So, he was asked to furnish the Commission with the list of those properties, but from that day, he went underground. All efforts to get him proved abortive.

The Commission said Mr Izuagbe should be declared wanted which we did. Left with no option, the investigating team obtained duly signed search warrant which was used to search the office of Carlisle Property on No 30, Saka Tinubu, VI Lagos.

There, the team recovered documents containing a list of properties yielding income to the defendant. It shows that some of the properties were purchased from the Presidential Implementation Committee for Sale of Landed Assets.
Some were bought from CBN. So, we have to write the Land Registry of Abuja, Lagos and also wrote the CBN.

The properties formed part of the properties in the document analysed by the combined team and from the holistic analysis, some infractions were observed in the forms. It was discovered that a property known as 15 McDonald Ikoyi Lagos which was purchased through Tiny Tee Ltd was not disclosed in the form.
We also discovered that 17and 17A Macdonald were bought for N497 million in 2006. The defendant filled the property in his form and said he bought it through sale of rice and sugar. But investigations revealed that the property was acquired through loan taken from the GTB.

The loans were repaid by cash lodgements made by individuals. We also discovered another property at 2A Glover Road Ikoyi. It was bought for N325 million between 2007 and 2008 from CBN. The property was not declared by the defendant at the end of his tenure in 2011. The property was purchased in the name of Carlisle Property and Investment Ltd. The defendant disclosed Carlisle as his company in the Assets Declaration Form.

We also discovered another property, No 37A, Glover Road, Ikoyi Lagos which yields N5.5 million annually to the defendants through the documents recovered through the search warrant.

Our investigation revealed that the property was not disclosed in the Assets declaration form. We also discovered another property known as either no 1 or 2482 Tagus Street, Maitama Abuja which was purchased from one Baba Akano in 1991 or thereabout. This property was bought at the same time with the formation of company Carlisle Property Ltd, but was never disclosed in his assets declaration form in 2003, 2007 and 2011.
We also discovered that a loan of N375 million was taken from GTB for purchase of property in London when the defendant was governor.

We looked out for the property in his assets declaration form, but we couldn’t find. He neither disclosed the loan or the property.