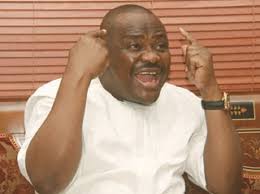 (News Investigators) A youth organization, the Bayelsa Youth Vanguard (BYV), has reacted to comments by the Rivers State Governor, Nyesom Wike, that his Bayelsa State counterpart, Henry Seriake Dickson, traded off the last governorship election in the state in exchange for protection from the Economic and Financial Crimes Commission (EFCC) after leaving office.

Wike, who was also reacting to earlier positions of the Bayelsa Governor that he sponsored the opposition All Progressives Congress (APC) against the candidate of the Peoples Democratic Party (PDP) in the election, said Dickson had wanted to join the APC but was blocked by the Minister for Petroleum Resources, Timipre Sylva.

Wike also derided Dickson on performance, saying he could not make infrastructural facilities available to his people in the state.

But the BYV in a statement by its Secretary, Barrister ThankGod Erekefe, and made available to the press in Yenagoa, the state capital on Tuesday, said Wike’s outburst was mere “hallucinations of a drunken man” who was all out to falsely discredit Governor Seriake Dickson and as such his comments should be disregarded by the public.

The statement said it was inconceivable that Dickson would condescend to joining the APC in such a crucial election and would not be exposed by the opposition party then as a major political campaign weapon.

Ayakpo also countered Wike on allegation that Dickson was seeking EFCC protection after office, saying such comment was tantamount to blackmail as Governor Dickson had all along acted well his path in office and would not be afraid to render a full account of his dedicated stewardship before and after leaving office.

The statement reads: “Our attention has been drawn to the various comments credited to Governor Nyesom Wike wherein he unjustly derided Governor Seriake Dickson over the recent governorship election in the state and in particular the accusation of trading off the election to curry favour of protecting him after leaving office.

“Nothing could be further from the truth. Governor Dickson had all along acted well his path in office and would not be afraid to render a full account of his dedicated stewardship before and after leaving office. Dickson remains a staunch member of the PDP and his various strong positions on the roles of federal institutions leading to the manipulations of the said election are our cogent convictions on his integrity as a leader of substance. He is surely a politician of conviction.

“So it’s trite even as we observe that Governor Wike is noted for such reckless, alarming and frivolous diatribes and misrepresentations. It’s in his political DNA, which speaks to his pedestrian inclinations on issues.
“Unlike Wike and his cohorts who played such ignoble role of hobnobbing with APC and its leadership to fight a proxy war in Bayelsa during the election, history will vindicate Dickson for his leadership and commitment to the basic interest of the Ijaw nation where Bayelsa State is at the heart of such consciousness and ably entrenched by Governor Dickson on the PDP platform throughout his tenure as governor.

“What we could deduce from Wike’s outburst on Governor Seriake Dickson was mere hallucinations of a drunken man who was all out to falsely discredit Dickson and as such his comments should be disregarded by the rational public. We saw a proxy war as orchestrated by Wike and his cohorts during the election and now to perhaps please his benefactors which is unfortunate.

“On the issue of performance, we make bold to say that Governor Dickson has etched his name in gold for his unmatched achievements in infrastructural developments especially in roads and bridges across the three senatorial districts, public institutions and legacy projects as well as the revolution in education. Wike should compare records of academic performances in WAEC and NECO between Rivers and Bayelsa states in recent times and correlate with his ill-informed assertions on what really constitute development in any modern society”.