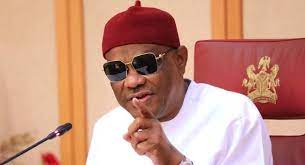 News Investigators/ Rivers state governor, Nyesom Wike has vowed to resign from office if anyone could prove he promised to make him his successor.

Mr Wike said this at a state dinner banquet held to celebrate the conferment of distinguished award on infrastructure delivery on him by President Muhammadu Buhari.

He said it was not in his character to make a promise to help anyone and to renege on the promise.

He explained that it had become pertinent for him to correct erroneous lies peddled by some persons that he reneged on his promise to make them his successor.

“God gives power. I challenge whoever will say he sat with me and I made a promise to him or her that the way things are going; he or she will be the next governor.

“If anybody can come out and challenge me, I will resign as governor of Rivers State,’’ he said.

Mr Wike dedicated the award conferred on him to God and to the people of Rivers State.

He said that but for God’s divine benevolence and the support of Rivers people, it would have been almost impossible for his administration to achieve much since 2015.

He thanked the Legislature and the Judiciary for working in synergy with the Executive in the interest and benefit of the state.

The governor commended all service chiefs, the police and the Nigeria Security and Civil Defence Corps for their steadfastness in ensuring that Rivers remains one of the safest states in the country.

Mr Wike authorised the Accountant-General of the State to pay N60 billion to contractors working on various projects in the 23 Local Government Areas of the state to enable them to conclude projects speedily.

He assured that he would not abandon any project started by his administration for the incoming government.

In his remarks, former governor of Rivers, Peter Odili, said the award bestowed on Gov. Wike by President Buhari was the best honour Rivers had received since its creation on May 27, 1967.

“For Mr President, from a different political party to confer that honour on a governor of an opposition party is not an easy business.

“It is unique; it is historic. May God bless you for bringing that honour to the State,’’ Mr Odili said.

Mr Odili noted that whenever people talked about the achievements of Wike, what came to mind are the flyover bridges, roads, hospitals, schools and other infrastructure.