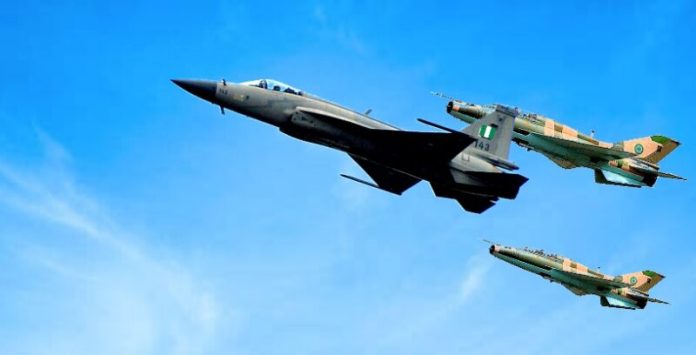 News Investigators/ The Chief of Air Staff, Oladayo Amao, has said that the Nigerian Air Force (NAF) in combating the insurgents has degraded their resources and capabilities through punitive strikes.

Mr. Amao, an Air Marshal, made the disclosure during a two-day Nigeria Air Force Operations Seminar on Thursday in Uyo.

The theme of this year’s seminar is: “Harnessing Nigerian Air Force Combat Experience in Joint Military Operations for Doctrinal Development.”

He said that the fierce action of the armed forces of Nigeria against the terrorists had forced many of them to surrender due to hardship meted out to them.

“We are all aware that our nation is currently faced with several security challenges, which do not only impinge on the stability of our country but also threaten our corporate existence as Nigerians.

“Accordingly, the Armed Forces of Nigeria has been at the forefront of addressing these issues, in concert with other security agencies.

“We have had significant gains in curtailing and degrading the resources and capabilities of these miscreants that seek to destabilise our nation.

“The NAF in particular has unleashed the coercive effects of air power on the terrorists through intensive air interdiction of their locations and facilities.

“These punitive strikes have degraded their resources, disrupted their supply lines, and denied them of their freedom of movement.

“Consequently, they have been surrendering in droves to their troops due to the unbearable hardship meted out to them by the combined kinetic efforts of the AFN,” Mr. Amao said.

Mr. Amao said that as a key stakeholder in the security architecture of the country, the NAF would continue to sustain its offensive air operations against the terrorists to bring misery to the criminals.

He explained that the aim of the seminar was basically to seek better ways of improving the efforts of the NAF and also help in re-strategising in the fight against insurgency.

Mr. Amao congratulated the newly young pilots and urged them to be prepared for the arduous task ahead of their operational environment.

“It is imperative that we re-appraise our past operational successes and failures to re-strategise towards a more operationally effective NAF that can contribute to expeditiously ending the current scourge of insecurity,” he said.

Mr. Amao said that he has set up a committee of officers to compile all allegations of accidental strikes on civilians as well as review the circumstances leading to such strikes in the course of operation.

He commended President Muhammadu Buhari for his unflinching support, through which the Nigerian Air Force has achieved its current level of operational effectiveness.

In his remarks, Akwa Ibom state governor, Udom Emmanuel commended the Nigerian Air Force for their relentless efforts in combating the insurgents.

Mr. Emmanuel said that under the current leadership of the Chief of the Air Staff, the Nigerian Air Force was experiencing professionalism in securing the nation.

He said that no development could take place in an insecure environment, pledged his commitment toward the advancement of Nigerian Air Force.

Mr. Emmanuel lauded the Air Force for the choice of Akwa Ibom for the seminar, adding that the Air Force has lived up to it’s statutory responsibilities.