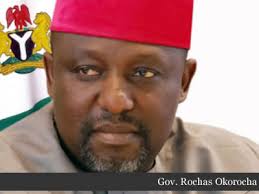 The Senate on Tuesday again slammed the Imo State Governor, Mr. Rochas Okorocha, saying it owes him  no apology over condemnation of his government’s proposed policy on the issuance of Identification Card  to Northerners residing in the state as a way of preventing attacks by the Boko Haram insurgents.

Okorocha, in a national daily, had demanded an open apology from the Senate over accusation of registering Northerners in the state, accusing the senators of engaging themselves in blackmail against the state government.

But, Deputy Senate President, Sen. Ike  Ekweremadu, who presided over Tuesday sittingm said the governor had the opportunity to brief senators from his state on the matter when the matter was first raised on Tuesday last week and eventually debated upon on Thursday.

However,the Deputy Senate Leader, Abdul Ningi  drew the attention of his colleagues to the newspaper publication where an aide of the governor confirmed that the project had commenced.

He said the governor’s aide granted an interview to a tabloid based in the northern part of the country where he stated that the screening of all Northerners residing in Imo State had started.

He said the governor’s aide explained that each of the northerners there would be duly registered to know their trade, residence and location and that they would be confirmed by the head of their trade union before they would be issued a card.

According to Ningi, the Okorocha’s aide further claimed that all the northerners would be fully documented  and that none of them should stop entering the state with their trucks by night.

Ningi further stated that the Imo State government had been employing media strategy to create an impression that the residence card project was an agenda initiated by the northern elders in the state.

Ekweremadu, who presided over the plenary said the senate would not subject the point of order raised by Ningi to debate because the issue was adequately debated last week and that the senate verdict on the issue was final.

On the issue of apology demanded by Okorocha,  Ekweremadu said the governor had the opportunity to brief senators from his state on the matter when the matter was first raised on Tuesday last week and eventually debated upon on Thursday.

He also ruled out insinuations that the senate was prosecuting Okorocha by its resolution of last week as part of Peoples Democratic Party (PDP)  agenda, stressing that senators from opposition political parties participated actively in the debate and voted on the motion.

It would be recalled that Governor Okorocha, had through his Senior Special Assistant, SSA, on Media, Mr. Sam Onwuemeodo, last weekend in some national dailies, took exception to what transpired in the Senate, on Thursday, July 3, 2014.

The  publications read in part: “The distinguished senators engaged in wild goose chase by allowing themselves to be deceived into deliberating and having resolutions on a matter that does not exist in Imo State.”

In another development, a bill for an act to establish the Nigerian Peace Corp has scaled through  the first reading in the senate Tuesday.

When eventually passed into law, Nigeria will become the second country in the world to have established the peace corps.