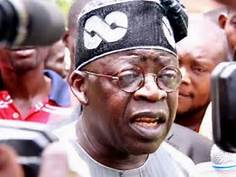 News Investigators/ A former governor of Lagos and national leader of the ruling All Progressives Congress (APC), Bola Tinubu, says for Nigeria to attain parity with older and more established democracies, the country must accept protests as part of its national development.

According to him, protest is essential because it lends greater depth to the relationship between government and the governed.

The APC national leader in a statement on Sunday reaffirmed his support for the people and their right to protest peacefully.

“The right to protest should be pacifically exercised and never abused; neither should it be feared nor unduly curtailed.

“The right to protest is more than integral to the democratic setting; it transcends any form of government.

“Because of my strong belief in the right to protest and my adherence to democratic ideals, I was among those who actively protested the annulment of the June 12 election.

“l eagerly joined and sometimes led multitudes who took to the streets to protest the singular injustice of that historic moment,’’ he said.

“We demanded foundation for the youth today to protest and to call to the fore their grievances whenever our social or political institutions fail them in a material way.

“Thus, I cannot not wax nostalgic about pro-democracy protests of the 1990s, yet castigate those who today protest against any form of institutionalized brutality.

“No democratically minded person can fault those who protests in this regard.

“No society, even the most democratic, is perfect.

“All nations suffer lapses that cause even their most respected institutions to fall short of their better ideals,’’ Tinubu said.

According to him, Nigeria’s imperfection does not stop improvement or reform.

He said that the country must constantly put its institutions and government to tests that may reshape Nigeria into a better nation and constantly improve the manner in which it treats its citizens.

“If we do not commit ourselves in this way, democracy may not long be ours,” he said

According to him, time has come to take the necessary legal actions to allow for the creation of state police and the recruitment and training of many more police officers.

He said that such state-created forces should be based on the modern tenets of community policing, optimal relations and cooperation with local communities.

Mr. Tinubu explained that measures such as these are needed to cure present gaps in how military and law enforcement treat the general public.

“We know there are criminal elements in society primed to harm people and seize property. We expect this of criminals.

“What is not expected is that people will be brutalized and scarred by those commissioned to protect and serve them.

“This anomaly must end,” Tinubu said.

“Such gross malpractice by a tainted minority must stop so that the bulk of good police officers may do their job properly, with the support and thanks of a grateful community.

“It must stand as a maxim for any compassionate, sane society that innocent people should not die or be injured at the hands of law enforcement.

“Enough blood has been spilled; enough pain has been felt,” he said.