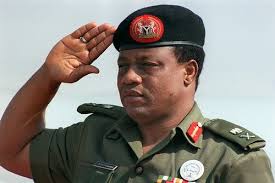 By Emmanuel Adesuji, Abuja.A retired General and Senator representing Kaduna State, Sen. Mohammed Saleh, on Thursday blamed the former military dictator, Gen. Ibrahim Badamasi Babangida for the current state of the military in the  fight against  Boko haram insurgents in North East.Saleh, a member of the Senate Committee on Defence, spoke to journalists on what he called ‘ an insider’s experience’ of the Nigerian military at the end of the five hours closed door meeting of the National Assembly Joint Committee on Defence and the Security Chiefs in Abuja.

The meeting summoned by the federal lawmakers was attended by Chief of Defence Staff, Air Marshall Alex Badeh alongside other Security Chiefs  on situation reports about the Boko Haram insurgency in the north east.

The Nigerian military have been engaged in fierce battle with the insurgents in the past week in a war to dislodge Boko Haram fighters from some towns and villages in Borno state.Saleh stated  that what the nation was experiencing was  a complete deterioration of the situation, insisting that “it is incumbent on us to find out why that deterioration.”According to him, “We have heard about our soldiers mutiny, it is also our responsibility to find out why that is happening.”“For us to understand why that is happening, we need to go back to the Babangida era,” Saleh said.

Adding: After the 1990 Okar coup, the federal government of Nigeria systematically and comprehensively disarmed the military. All the tanks, all the artillery guns were disarmed and locked up,” he added.“All the aircraft were parked in Ilorin and other places, flying stopped, training stopped to ensure regime security not national security,” he stated.“All the good officers of the Nigerian army were hounded out of the military. And there was over concentration of power at the centre which was the army headquarters.

“Prior to that, General Officers Commanding used to have training and manouvre grants,” Saleh further revealed.At the end of the meeting, Senate Chairman Committee on Defence, Senator George Thomson Sekibo told journalists that the Chief of Defence Staff briefed the two committees on the development in the North East.He explained further that the interactive session became necessary in view of the scary stories emanating from the north east as a result of the activities of Boko Haram islamists insurgency.“We have heard several stories from the media, some of the stories, the local are also contributing to it, the military is countering them and somehow it has become difficult to know exactly what is happening in the country.“We’ve been hearing of stories of major cities in those three states being taken over by the insurgents. We hear Goza have been taken, the next minute we hear it has been recaptured by the army. We’ve been hearing of stories of our armed forces being driven away from those areas. That is really scary, ” the senator said.

The committee are to meet later with President Goodluck Jonathan to discuss some grey areas.