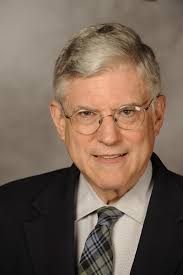 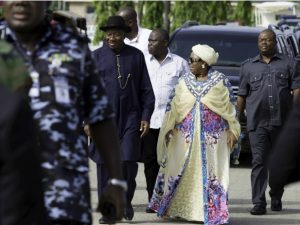 The Economic and Financial Crimes Commission (EFCC) has frozen U.S. dollar bank accounts that former Nigerian First Lady Patience Jonathan claims are hers. The total value of the accounts is worth $31.5 million. She has applied to the Federal High Court in Lagos to unfreeze the accounts. Many Nigerians, including the Nigeria Labour Congress, are asking how she accumulated $31.5 million in the first place.

It is hard to see how Patience Jonathan could have piled-up such a large amount of money. Now fifty-eight years of age, she is Nigerian-university educated, and has taught off and on and held various civil service jobs in her oil-rich native state, Bayelsa. She went into banking in 1997. When her husband, Goodluck Jonathan, became deputy governor of Bayelsa, the governor made her the state’s permanent secretary, the pinnacle of the state civil service. The appointment was widely criticized as she had no obvious qualifications for the post, and had been out of the civil service for years.

After her husband became chief of state, she was known for her arrogance and imperiousness, and she is widely disliked. As first lady, she insisted on the use of the title of “Dame.” (There is no provision for a first lady in the Nigerian constitution; the wife of the current president calls herself ‘Mrs. Buhari.’) She also made political blunders. Shortly after the Boko Haram kidnapping of the Chibok school girls, in a meeting with community leaders, she accused them of fabricating the abduction to give her husband’s administration a bad name. Stories circulate that she collected fees for access to her husband.

At present, she is in London, ostensibly for medical treatment.

As is often the case with grand corruption at the top in Nigeria, the details are murky. According to the media, some of the accounts were opened in the names of Patience Jonathan’s domestic servants, who had no access to them. Her lawyer claims that $15 million of the frozen money was paid by the Nigerian state for her medical treatment in the UK. Because she is so widely disliked, there is always the danger of leaping to conclusions. Nevertheless, judging by the media and social media, most Nigerians regard her as guilty. With his wife under investigation and facing likely arrest should she return to Nigeria, the corruption issue is getting close to former President Goodluck Jonathan. But moving against the former president, who remains popular in the predominantly Christian south and east, could pose special challenges for the Buhari government.

The average Nigerian is very poor, poorer still with the current state of Nigeria’s economy. They have little access to quality health care while elites almost always go abroad for medical treatment. Patience Jonathan’s expensive ‘treatment’ is typical of the corruption Nigerian elites are often known for. Popular indignation over corruption under Patience’s husband played a major role in Muhammadu Buhari’s victory in the 2015 presidential elections.