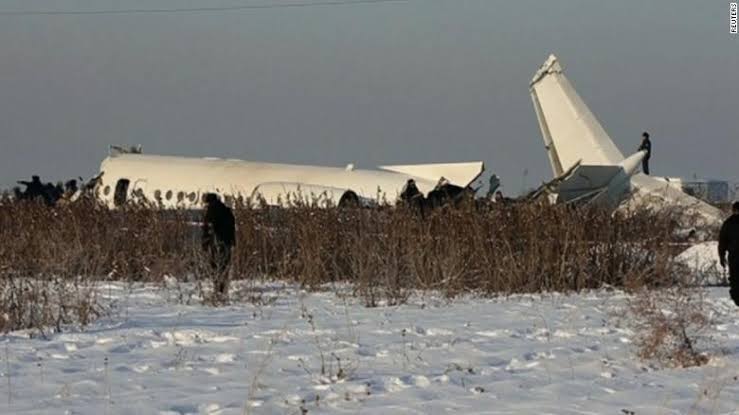 ( News Investigators) At least 15 people have died after a passenger jet carrying about 100 people from Almaty in Kazakhstan crashed just after take-off on Friday morning, news agency Kazinform reported.

The Fokker 100 aircraft operated by Kazakh airline Bek Air broke through a concrete wall before hitting a two-storey residential building.

Pictures showed ambulances arriving in the snowy area and rescue teams were trying to retrieve those left inside the severely damaged plane.

Kazakh authorities published a passenger list showing 93 guests on board and 5 crew members, including eight children.

Some 30 people were injured, with 17 of them believed to be in critical condition, officials said. More than 60 people survived, according to the airport where the crash happened.

Russian news agency TASS reported that no one was inside the building the plane collided with.

The plane was flying from Almaty to Nursultan, Kazakhstan’s capital city, which was formerly known as Astana.

Kazakh President Kassym-Jomart Tokayev took to Twitter to express his condolences and said he had formed a government commission.

Saturday would be a day of national mourning, Tokayev said, according to Kazinform.