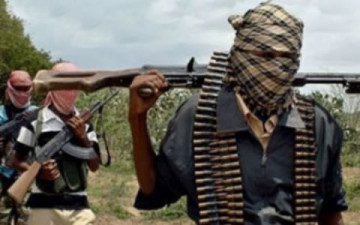 The White House directed U.S. agencies to block financial transactions with the two groups, which it blamed for thousands of deaths in northeast and central Nigeria, including attacks on churches and mosques and a 2011 suicide bombing of the United Nations building in Abuja.

“By cutting these terrorist organizations off from U.S. financial institutions and enablingbanks to freeze assets held in the United States, these designations demonstrate our strong support for Nigeria’s fight against terrorism and its efforts to address security challenges in the north,” Lisa Monaco, President Barack Obama’s homeland security and counterterrorism adviser, said in a statement.

Boko Haram and other splinter Islamist groups are seen as the biggest security threat in Nigeria, Africa’s most populous country and top oil exporter.

In a swift reaction, the Nigerian military said they were encouraged by the U.S. decision describing it as a welcome development in furtherance of international understanding and cooperation in the fight against terrorism.”

“It appears they now understand the reality of the challenges we face in dealing with Boko Haram,” said Nigerian Defense spokesman Brigadier General Chris Olukolade. “…

U.S. lawmakers have been pushing for the group to be formally designated a foreign terrorist organization.

“What these murderers have brought to Nigeria and surrounding countries is misery and death with no redeeming outcome,” said Representative Chris Smith, who chaired a congressional hearing on Boko Haram on Wednesday and visited Nigeria in September.

American officials said instability in Nigeria was of direct concern to the United States. Violence also discourages investment and has spread to Nigeria’s neighbors.

“These groups attack the Nigerian government, they attack the military, they attack ordinary Nigerians of all walks of life,” Assistant Secretary of State Linda Thomas-Greenfield told the hearing.

A senior official said it was not immediately clear what assets Boko Haram and Ansaru held, but the U.S. Treasury needed the official designation before it could determine their holdings.

The official told reporters that Washington had worked with the Nigerian government in making the designation.

Among its most lethal attacks, Boko Haram carried out indiscriminate attacks in Benisheikh, Nigeria in September 2013 that killed more than 160 innocent civilians, including women and children.  Boko Haram has also conducted attacks against international targets, including a suicide bombing of the United Nations building in Abuja on August 26, 2011, that killed 21 people and injured dozens more, many of them aid workers supporting development projects across Nigeria.