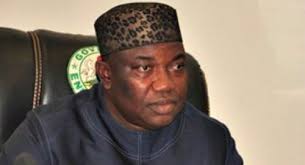 Governor of Enugu State, Ifeanyi Ugwuanyi has presented a budget of N109,199 billion, being the estimate for the 2019 fiscal year to the State House of Assembly.

Mr. Ugwuanyi urged for speedy consideration and passage, saying the increase was in keeping with his administration’s promise to expand its expenditure vis-a-vis projects and programmes of the state as the economy of the nation improves “to ensure that every citizen and residents of Enugu State will reap the full benefits of the dividends of democracy”.

The governor who stated that his administration has implemented the previous budgets toN85%, explained that “out of the total budget proposal of N109.199 billion, the sum of N65.7 billion, representing 60.17%, is for recurrent expenditure. He noted that “this is higher than the 2018 figure of N60.7 billion by 8.22%.

The governor revealed that works and infrastructure would gulp the highest amount of N16.5billion because of the premium the state government placed on infrastructural development of the state.

He maintained that the government intends to complete all ongoing road projects and construct new ones across the 17 local government areas of the state as well as provide other critical infrastructure that will stimulate economic growth and job creation.

The governor said that the health sector was allocated the sum of N2.37 billion, stating that the sector received a boost in its financing to enable his administration fully to equip the already completed Enugu State Medical Diagnostic Centre to commence operation in 2019.

According to him, the state government also intends to sustain and improve on the services being provided through free maternal and child healthcare programme.

“We want to ensure that our children, pregnant and nursing mothers do not die from preventable ailments, thus we have set aside the sum total of N2.37 billion to all the ministries, departments and agencies under the health sector in the2019 fiscal year”.

According to him, agriculture received an allocation of N633.5m to consolidate the efforts of his administration towards commercialization of the sector to achieve food security in the state, while N5.522b went to the education sector to sustain the tempo of government in the ongoing compulsory free education from primary to junior secondary schools; renovation, construction and equipping of schools at all levels, among others.

The governor equally announced that the sum of N742m was budgeted for the expansion of Enugu and Nsukka urban water scheme, boosting of small town water supply project and the state rural supply project and the State Rural Water Supply and Sanitation Agency (ENRUWASA) with the aim of “making potable water available to our people irrespective of whether they live in a rural or urban area”.