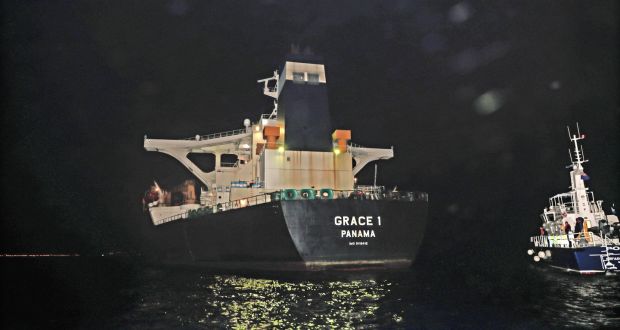 The U.S. is gravely disappointed with the U.K. after a Gibraltar court allowed the release of an Iranian tanker suspected of hauling oil to Syria, and threatened sanctions against ports, banks and anyone else who does business with the ship or its crew, two administration officials said.

The court’s decision Thursday to release the Grace 1 was a missed opportunity and the Trump administration hopes that the U.K. government and authorities in Gibraltar will reconsider, according to the officials, who asked not to be identified discussing private deliberations.

They said the court order rewards Iranian terrorism and Tehran will interpret the action as appeasement.

State Department spokeswoman Morgan Ortagus said in a statement Thursday night that the ship “was assisting the Islamic Revolutionary Guard Corps (IRGC) by transporting oil from Iran to Syria.

“This could result in serious consequences for any individuals associated with the Grace I.” In April, the Guard Corps was designated a terrorist organization by the Trump administration.

The Grace 1 had been held in Gibraltar after British forces seized it last month on suspicion that it was hauling Iranian crude oil to Syria.

The U.S. Department of Justice is seeking to block the vessel’s release, but the Gibraltar Supreme Court on Thursday said American authorities hadn’t filed the appropriate legal application.

The two administration officials said the Grace 1 should now be considered a pariah. Anyone that does business with the ship, its crew or its owners, or provides financial transactions or port services to the vessel could be liable for evading U.S. sanctions, the officials said.

They argued that the U.K. should think of the tanker issue in terms of the broader relationship with the U.S., particularly as Prime Minister Boris Johnson’s government presses forward with departing the European Union and seeks a free-trade agreement with the U.S.

While the people wouldn’t say the release threatens prospects for that deal, they added that the U.K. should ask if it wants to do business with the U.S. or Iran.

Iran said the ship wouldn’t sail to a sanctioned destination and is now rushing to return it to international waters before the U.S. finds a way to prolong its six-week detention.

“In light of the assurances we have received, there are no longer any reasonable grounds for the continued legal detention of the Grace 1 in order to ensure compliance” with European sanctions, the Gibraltar government said in an emailed statement.