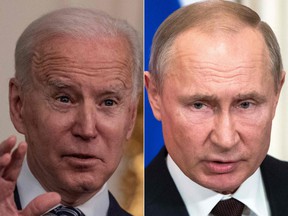 News Investigators/ Russia says statements made by the United States (U.S.) on the need to contain it are not constructive ahead of the Wednesday summit between Russian President Vladimir Putin and US President Joe Biden.
Kremlin spokesman, Dmitry Peskov said this in an interview with Channel One Russia broadcaster.
“We all hear the words that Moscow will have to pay for this, for that.

“This, of course, does not ease the general atmosphere, but again I repeat: after all, both sides have the intention to speak – both President Putin and President Biden,” Peskov said.
The spokesman added that Putin had always been clear in outlining “the red lines” for Russia.

“Putin is always clear in outlining the red lines for Russia, especially in such a difficult conversation that lies ahead today,” Mr. Peskov added. (Sputnik/NAN)