It is not clear which group was responsible for the attack, but the Boko Haram insurgents had in recent time carried out several deadly attack in Maiduguri and its environment in the trouble northeast zone of Nigeria.

The exact casualty figure is not yet known as at the time of this report, sources say over 30 persons were counted as emergency workers struggled to rescue the injured.

Eyewitness account said a teenage girl walked into the market hiding the explosive under her hijab and detonated it while the second girl waited for onlookers to gather before detonating the second explosive.

“The market premises has been taken over by the security operatives, while the rescue operations are ongoing,” the eyewitness added. 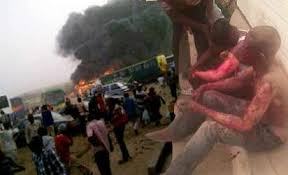 that the female bomber kept a parcel in one of the shops on a one-way, beside the popular Market and told the traders that she wanted to take an item from the market and in the process went down.

The insurgent reportedly detonated the explosive while the occupants of the market were making attempt to assist her as they were deceived that she had been injured.