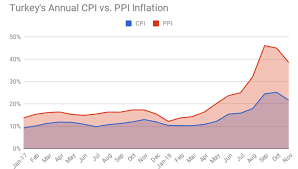 Turkey’s annualised inflation rate on Thursday fell sharply to 9.26 per cent in September from 15 per cent in August, official data revealed.

According to the Turkish Statistical Institute (TurkStat), inflation went down to single digits for the first time in two years.

TurkStat said that month-on-month inflation stood at just below one per cent in September as food prices weakened.

Turkish inflation topped 25 per cent in Oct. 2018, due to a steep devaluation of the lira currency.

According to Seyfettin Gursel, Director, Bahcesehir University Centre for Economic and Social Research (BETAM), the recovery will be short-lived.

Gursel said that a decline in inflation was already expected for September since the effects of 2018 major spike had faded, estimating a year-end inflation rate at 12.5 per cent.

The Minister of Finance, Berat Albayrak, also noted that government expected the inflation to reduce to 12 per cent by end of 2019.

“The government’s aim is to bring inflation down to below 9 per cent in 2020.

He also set a five per cent economic growth target for 2020.

“Both goals are too ambitious to come true.

Since July, the central bank aggressively cut its benchmark interest rate by 7.5 per cent to 16.50 per cent.

According to Erdogan, lower rates will bring lower inflation as opposed to traditional beliefs in how the market operates.

“The main test for the government will be if they can rejuvenate investor confidence in 2020, citing low investments, high unemployment, political and security risks, mainly due to lingering civil war in Syria,“ Gursel said.