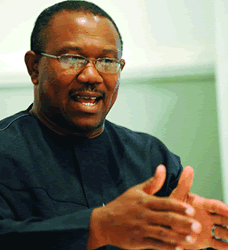 The deaths caused by a stampede during a visit by the All Progressives Grand Alliance to the Holy Ghost Adoration Ministry in Anambra State resulted from the unfortunate mix of religiosity and politics, writes Ojo M. Maduekwe

In a corruption ridden country like Nigeria, two institutions stand poles apart, at least to some people. While most of the politicians in Nigeria, if not all, are considered corrupt, the religious leaders on the other hand still remain largely regarded as incorruptible by a vast majority of their adherents. A summary of the comparison is that of black versus white.

This contrast of both institutions is why some people are quick to voice their opinion regarding any form of mingling between clerics and politicians. What does God have to do with politics many had sometimes asked? Perhaps, with no biblical passage to argue both for and against, it may rather be a difficult question. But the question of what politicians have to do with God is not.

Politics, people say is a game of numbers and in a religiously addictive country like Nigeria, the influential clerics who enjoy a cult following have the numbers in multitudes and to their advantage. The average politician being who he is gets easily drawn towards the clerics with the greatest number of worshippers and with an overbearing influence on their congregation. This is not limited to a class of officer seekers.

With the clerics on their side, politicians have the congregation; and with the congregation, an increase in votes when counted. The sad incidence that occurred at the weekend in Uke, Idemili North Council Area of Anambra State, were over 25 people were reportedly stampeded to death and scores of others injured, has once again made the question of the relationship between politics and religion a relevant topic for discussion.

Media reports had it that the state governor, Peter Obi, in the company of 10 others including the APGA National Chairman, Chief Victor Umeh and the APGA governorship candidate, Chief Willie Obiano, had arrived the church premises for a night vigil. The APGA team was said to have left the church premises at 3:30am before the close of the crusade at about 5:08am before the stampede happened. There are conflicting accounts as to what actually caused the stampede.

According to a THISDAY report, “Eyewitnesses said trouble started shortly after the event when the congregation was leaving as a group of people started shouting ‘Fire, Fire, Fire’, which immediately sent people scampering for safety. Some, however, believed the commotion was deliberately organised by some people who felt Governor Obi was still at the crusade, even though he had already left the venue quietly.”

In another account, a source had told THISDAY that the crowd outside the church had started shouting ‘Onwa’, a word meaning ‘Light’ and used to refer to Senator Chris Ngige of the All Progressives Congress (APC). In reaction, it was said that the security men on the ground approached the direction the shout was coming from. In the course of doing so, a gunshot was allegedly fired into the air which caused the people to run in different direction.

Also, the large turnout of people to the church is part of what’s been said to have led to the large number of deaths recorded. “The number of crusaders, according to sources, got to around 100,000 because the day was the All Saints’ Day and the first day of the month which so many people usually take advantage of to pray for the new month,” THISDAY earlier reported.

Normally it is said that the church auditorium has a capacity to take 5,000 people. There were those who said that the large turnout of people, which was both a mix of worshippers and party supporters, was because Governor Peter Obi decided to seize the opportunity to campaign for Obiano. This, it is expected, the governor might later debunk as untrue.

The news of the stampede was quick to travel round the country, thanks to the quick reporting of the online news and blogs. Soon, several reactions from indigenes of the state, Nigerians outside and politicians in the state would later trail the incidence. One of the first politicians to react was Governor Obi who pledged to set up a panel of enquiry “to ascertain the immediate and remote causes of the incident.”

According to a THISDAY report, following the devastating development, Obi immediately cancelled all his engagements, including a campaign kick-off at Nsugbe, live radio programme at Silverbird, kick-off of road projects, inspection of the on-going shopping mall at Onitsha and the on-going stadium at Awka, the state capital.

“The governor was the first person to visit the Adoration Ground with security agents immediately he got wind of the stampede,” the report said. Also to visit the scene of the accident were two Deputy Inspectors-General of Police visiting the state, P. I Leha and Kachi Udeogu, accompanied by the state’s Commissioner of Police, Bala Nassarawa.

At the venue of the incident, Obi, while speaking with journalists said he had attended the vigil on the invitation of the Reverend Father in charge, Reverend Obimma. He went ahead to give a first-hand account of what transpired at the venue before the stampede occurred.

“I noticed something unusual; when I wanted to speak, a group of people started shouting somebody’s name. I had to curtail them and said we are here to worship. I was here with a team of about ten people. I have my immediate senior sister who is a reverend sister. At the time I left everything was normal, there was no incident,” Obi said.

Asked whether if he thought it was started by fire, he responded saying, “I don’t think there was fire. I have always said that people should try and live a decent life, do things properly. I have been to other crusade before. I stay up to five hours. That was how long I stayed at this one before I left. If people have started shouting fire, where is the fire? People had done similar thing before (at Adoration Ground in Enugu) and people lost their lives. We can’t continue like this. It’s unfair.”

However, the claim by Governor Obi that he left the church premises hours before the stampede happened have been faulted by some people who would rather attribute the cause of the stampede to his entourage. They disagreed, saying there was no way he and his entourage would have left without the crowd noticing. They wondered how come the crowd would remain hours after he had left.

Some stakeholders in the state argued that the above statement where Obi said he heard some group of people shouting someone’s name, if placed in contrast with the second account of what possibly could have caused the stampede, may give an insight to the truthfulness of either of the story. The second account had attributed the stampede to the shout of ‘Onwa’ by some people which led to an alleged gunshot from a security agent.

Also some stakeholders wondered why there were no crowd control measures for such a mammoth gathering. Others went to the extent of questioning why the governor would take his campaign to a church auditorium that could barely accommodate 5,000 people and not to an open field.

In a bid to absolve the police of any blame, Udeogu said, “There was no security measure that was neglected. From what I heard, the incident took place when people were going away. Normally if you want to secure a place, you secure the perimeters of the worship centre but you can’t police the road. Initially, I thought it was a cathedral with limited access to exit if there was an emergency, but you can see from here that if there was an emergency, people would melt away; there is no restraint here.”

Many others on the opposing side of the argument said it was not the size of the venue that was the problem but that the security agencies failed to handle and control the teeming crowd of worshippers and supporters. Citing the testimony of the police, they said the venue was not limited in entrance to prevent easy flow of people in the cause of a commotion.

Also reacting, the candidate of the Peoples Democratic Party (PDP) in the November 16 Anambra gubernatorial election, Comrade Tony Nwoye, called on other political party aspirants not to politicise the stampede. In an interview with THISDAY, he said the incidence called for a sober reflection, mourning and condolence with the victim’s family.

“I send my condolence to the victim’s families. This is really very distressing news for me and, for the state, a sad incidence because the loss of a life is bad. Now we are talking of over 25 lives which I must say is both saddening and disheartening. I urge other political players in the state to respect those who died and not play politics with what has happened.

“As a state we should go into a reflective mood on what is important in government and seek for ways to always better the lot of the ordinary people whom have called us to serve. Anyone who seeks to politicise this stampede for the purpose of making cheap political points; any votes gotten on this premise would be blood vote,” Nwoye said.

A large number of state stakeholders were in agreement that it is time both religious leaders and politicians realise how their mingling affects their congregation and supporters and opined that election campaigns be taken outside the church premises into a secular place like an open field so as to prevent what happened from repeating itself.