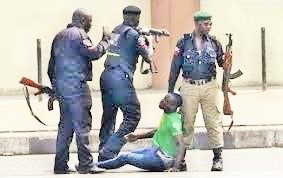 (News Investigators)/ The Amnesty International says despite efforts by the Nigerian government to address torture in the country, the use of torture by the police and others is still widespread.

The organization urged the government to declare in strong terms that security personnel would be held accountable for the crime, noting that despite an existing law against the use of torture, no police officer has been charged under the act.

Director, Amnesty International in Nigeria, Osai Ojigho, said in a statement in Abuja, Wednesday that torture victims are still being denied justice, with the Nigerian judicial system failing to prevent or punish torture, perpetuating a culture of impunity

According to Amnesty International, “On 5 March 2018 a high court in Ogidi, Idemili North Local Government Area of Anambra State ordered the Nigeria Police Force to pay compensation to Ugochukwu Oraefo for extortion, illegal arrest, unlawful detention and torture after he was arrested by officers of the Special Anti-Robbery Squad (SARS) Awkuzu, Anambra state. The police have neither paid the victim nor ensured that the police officers involved have been brought to justice.

“Amnesty International highlighted rampant torture and ill-treatment especially by the SARS police unit in the report: Nigeria: ‘You Have Signed Your Death Warrant’ in 2016, yet shocking incidents of torture still continue. Every now and then videos of police officers or soldiers torturing suspects surface and generate outrage.

“It is time Nigerian authorities declare, in strong terms, that security personnel will be held accountable for torture and that victims of torture will get justice, including rehabilitation and compensation,” it stated.

“Our research also shows that despite an existing law against the use of torture, no police officer has been charged under the act. Moreover, the Nigerian police is yet to amend Force Order 237 which allows police officers to shoot at fleeing suspects, giving room for lethal use of force that sometimes leads to extrajudicial killings.

“In response, the police authorities acknowledged that SARS has been responsible for widespread violations and announced some reforms, while the government directed the National Human Rights Commission to set up a panel to investigate the activities of SARS.

“The panel submitted its report in May 2019. An Amnesty International poll in May 2019 indicated that 63 per cent of poll respondents regard torture and unlawful killings by the police, as the most serious human rights violation they want the government to address,” it added.