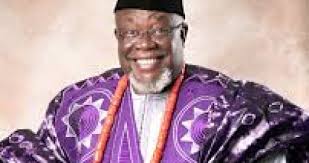 The national leader of the All Progressives Congress (APC), Mr. Bola Ahmed Tinubu has described as falsehoods and cheap blackmail, the reasons adduced by Mr. Tom Ikimi for dumping the APC.Tinubu, on Tuesday said a man of Ikimi’s antecedents with awful past could not have been elected the National Chairman of APC, saying he had seen him perpetrate deviousness in his years in public life.Ikimi, a former Minister of Foreign Affairs recently dumped the APC and joined the ruling Peoples Democratic Party (PDP), accusing Asiwaju Tinubu of hijacking his former party.A statement from Tinubu’s Media Office reads, “Regarding Ikimi’s bid for the Chairmanship of the Party. It was clear to practically everyone who had the interest of the party at heart that we simply could not have a man of Tom Ikimi’s antecedents as Chair of the party.“As chairman of the NRC, one of the only two political parties in the country under the military transition programme, Tom Ikimi not only connived with the then military regime to annul the elections, terminate the democratic process and sell off his party.“He became Abacha’s foreign minister, convincing the world that heinous state murders like the hanging of Ken Saro Wiwa were just acts! If Ikimi were the Chair of APC the party would have to sleep with both eyes open lest its chairman sell off the party before day break .No matter what anyone may say about me it is unlikely that I can be accused of supporting incompetent or morally light-weight individuals for important political positions.“My philosophy is to put the best forward, men and women of competence and integrity, who can stand up to us politicians to challenge us and say no when necessary. Such people are not noisy or able to gain attention by being loud, I believe my role is to do all I can to project them. Who in their right mind would compare the highly principled Chief Bisi Akande, or Chief Oyegun with a Tom Ikimi? Either of these two men are known for their no-nonsense styles, not once in their careers would you hear that they betrayed a cause or were anybody’s stooge.“Ikimi also concocts a story of a meeting he claims I had with Deziani on the Oando/ ConocoPhillips transaction on the eve of the APC Convention.Only a Tom Ikimi can come up with the absurd falsehood that on the eve of the APC Convention when I was in crucial meetings practically round the clock I was meeting with the Minister for Petroleum! What exactly would have been the point of such a meeting especially on the eve of the Convention? Was it to prevent Tom Ikimi from emerging as Chairman of the APC? To what end? Of what value would it be to anyone except Ikimi himself? Besides if this was so why he is back to the same party that purportedly planned his down fall?“Regarding the nonsense about selling out on Ribadu, I think common sense should dictate that if ever such a deal were reached we would have had to inform our members in all the States. How could that have been done secretly? How do you tell hundreds of thousands of people not to vote for your own party without it becoming public knowledge?“At the formation of the APC, a crucial debate ensued about what to do about persons like Ikimi who had done awful things in the past, but who were now minded to align with the progressive tendency in Nigerian politics. Should we forever blacklist them? This would have been the easiest route, but it would have kept rancour alive. It would have made us slaves to the bleakest chapters of our past. Instead we opted to extend the hand of brotherhood, reconcile and put the past behind us. This would enable a broader political consensus, while also giving the likes of Ikimi an opportunity to atone for their grievous wrongs against the people and be rehabilitated.“We recognized that many leading Nigerians had committed acts of shame. Some for private profit, others who were otherwise decent people who had become prisoners to a terrible system.Not surprisingly, Ikimi acting true to type abuse that magnanimity. He was never sincerely committed to the party. He was always playing out a PDP script.“He only wanted the chairmanship of the party as a bargaining chip for negotiations with his benefactors.  His defection purportedly on account of the loss of the chairmanship of the party is a mere subterfuge, once his ploy failed he had no other objective within the party, I knew he would go back to his sponsors. He is back in the company he deserves. And APC is better for it”.