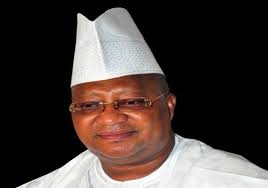 OSOGBO/By Nuel Suji – The former Governor of Osun State and a Senator, Isiaka Adeleke who died Sunday, has been buried, even as angry youths vented their anger over his death on governors who attended the funeral.

The confusion started earlier into the burial ceremony, Monday, when some enraged youths on sighting an APC stalwart – Idiat Babalola, sitting beside the younger brother of the late Senator, Deji Adeleke, as well as some South West Governors, including Senator Ibikunle Amosu of Ogun; Mr. Rotimi Akeredolu (SAN) of Ondo State State demanded that she must leave the venue.

Although, autopsy report was said to have attributed his sudden death to overdose of pain killers, the late Adeleke was believed to have been poisoned by the suspected rivalry political  camp within his party.

The State APC was speculated to have anointed a successor to the incumbent Governor Rauf Aregbesola and Babalola was allegedly said to be the running mate of the candidate.

Unfortunately, when she declined the highly-charged youths demand, they angrily shook the canopy covering the Governors and other VIPs, which subsequently collapsed on them.

Babalola escaped the attack by whiskers, from the mobs as the Security aides of Governor Amosu shielded her.

It would be recalled that the irate youths had earlier vented their anger on a journalist and a cameraman from NTA, Sunday while trying to cover the activities at the residence of late senator.

Meanwhile, Adeleke aged 62 has been buried in Ede, amid wailing by the relatives, admirers and fans according to the Islamic rites.

Also, due to Senator Adeleke’s sudden death, the meeting of the South West Governors which was originally scheduled to hold today has been cancelled.