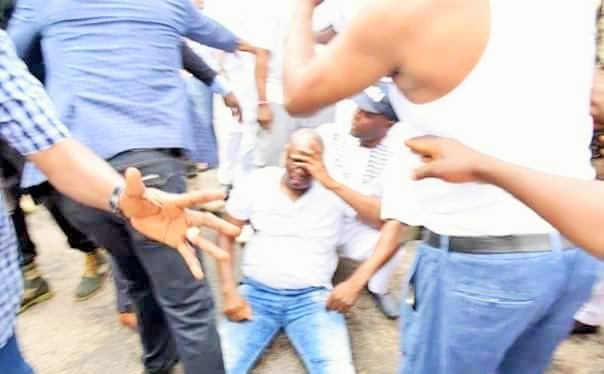 By Alaba Ajibade – Governor of Ekiti State, Ayodele Fayose has accused the Nigerian police of a plot to kill him, claiming that a policeman fired a shot at him while forcing his way to the venue of a political rally in the state.

Mr. Fayose, with some supporters was on his way to attend a rally organized by the Peoples Democratic Party (PDP) ahead of the next Saturday governorship election in the state but was turned back by the police who barricaded the entrance of the Government House. 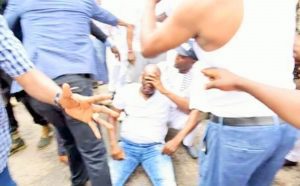 But Deputy Inspector General of Police in charge of Operation, Habila Joshak in a swift reaction said the police acted to forestall a breakdown of law and order in the state.

Mr. Joshak, however, said no rally would be allowed any more in the state unless expressly approved by the police.

He denied blocking the entrance of the governor’s office, saying only the road from Fajuyi to the state Secretariat was blocked.

“But we are not going to allow any unauthorized rally that can trigger violence in the state. You can see that the state is tensed up.

“As law enforcement agent, we must be proactive and take actions that can prevent crisis rather than trying to quell it after it might have broken out.”

Mr. Fayose who wore a neck brace while speaking to his supporters, wept bitterly while narrating how a policeman allegedly slapped him on Wednesday morning.

The embattled Governor said the MOPOL of the Nigerian police and the AIG ordered that the governor should be killed. “I was slapped by a policeman who kicked me and shot at me but I want you all to be strong and be of great courage.”

He told the crowd that he had to leave the hospital briefly to meet with them, adding that he was in great pains.

Fayose reportedly collapsed after inhaling substance of teargas allegedly fired by security operatives who laid siege to the government house in Ado-Ekiti on Wednesday morning.

“My people, the Lord will fight this battle. This battle must be won. This is army of occupation, they have come to occupy our land. This is not the democracy we asked for. I want you to stand and remain standing, don’t be afraid.

“Remain and face them. I pray they will not cause 1983 problem in Ekiti. I call on the international community, Ekiti is under siege, Nigeria is in trouble, it is our hour of need. How can I be a governor of Ekiti state and be treated like this in our own country?

“I will go back to the hospital and remain there for a while to rest. I am having a lot of pains but I prefer to bear these pains because of you. I am in severe pain, I can’t turn this neck anymore. If anything happens to me, the inspector general of police should be held accountable.”