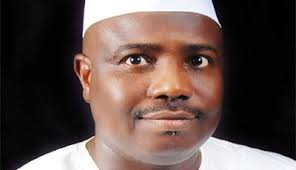 Speaker Tambuwal had been elected governor of Sokoto having emerged winner in the April 11 governorship elections and is due to be sworn-in this Friday, May 29 alongside other governors-elect.

The decision to step down from the Speaker seat was to avoid constitutional crisis of taking another oath of office on May 29 while that of the speakership still subsists.

But for his new position as governor in waiting, he would have remained speaker till June 6, pending the dissolution of the 7th National Assembly by the proclamation of the new President Muhammadu Buhari.

While he will be inaugurated as governor on May 29, his current tenure as a member of the House will terminate on June 6, while the next legislative day would be Tuesday June 9.

Tambuwal, while briefing newsmen  after Tuesday’s sitting of the House, disclosed that the members agreed at an executive session that Ihedioha should preside over the affairs of the House till June 6.

“My stay here in the House would have effectively come to an end on May 29 after I would have been inaugurated as governor.

“We have to avoid any possible issues on this, since the constitution is silent on what happens when a sitting speaker has to move to another office,” he added.

According to him, the 1999 Constitution does not envisage  a situation where the speaker will leave one office for another, while the oath taken for the current one is subsisting.

However, he noted that under the Standing Orders of the House, a Speaker Pro-tempore was required to be elected by members to run the House for any period the substantive speaker  would not be available.

Meanwhile, the House has scheduled its valedictory sitting for Wednesday, May 27.