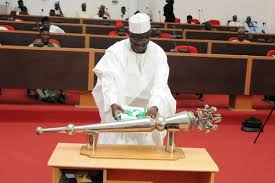 By Tom Garba, Yola – A Yola High Court presided over by the State Chief Judge, Justice Ishaya Banu, has fixed February 23 for further mention in the case filed against Adamawa House of Assembly for approving N11 billion virement.

Adamawa House of Assembly member, Alhaji Abubakar Abdulrahman (APC-Mubi South) has filed a suit against the House for approving N11 billion sectoral virement in the 2015 budget.

The plaintiff, Abdulrahman, who was the chairman House Committee on Finance, Budget and Appropriation before his suspension by the House which dissolved the committee he was chairing sued the Assembly alongside it Speaker, Alhaji Kabiru Mijinyawa, and 15 other lawmakers as defendants.

At the mentioning of the suit on Wednesday, counsel to the plaintiff, Mr Joshua Wugira, urged for adjournment for the respondents to be properly served.

The suit No. ADSY/70/2015 was seeking the declaration of the court that: ” the purported approval so given by the defendants to the Executive Governor of Adamawa state for the sectoral virement on capital estimates was unlawful, null and void.

“A consequential order of the Honourable court nullifying the purported approval so given by the defendants to the Executive Governor of Adamawa State for the 2015 sectoral virement on capital estimate.”