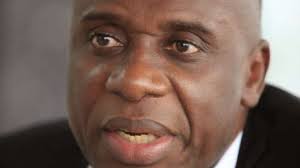 By Sadiq Umar – The Supreme Court has dismissed the suit by the All Progressives Congress (APC) challenging a court verdict which nullifies the party’s primaries for candidates for the general elections.

The APC in Rivers is divided between Mr. Abe led faction and those loyal to the Minister of Transportation, Rotimi Amaechi.

In the suit, Abe’s faction sought and obtained a judgement that annulled the congresses and primaries conducted by the Amaechi faction. The Amaechi faction had appealed the verdict of the High Court, calling for it to be upturned.

But ruling in the case on Tuesday, the Supreme Court struck out the case.

In a lead judgement, Justice Aliyu Sanusi, said there was substance in the objection raised by the respondent.

He said that the reason for dismissing the appeal would be made known at a later date to be announced.

The ruling has sealed the chances of APC fielding governorship candidate in the March 2 election.

It would be recalled that following the verdict of the court against the primaries of the party, the Independent National Electoral Commission, INEC, has refused to accommodate on the list, the names of candidates for the governorship, National Assembly and state house of assembly posts in the state.