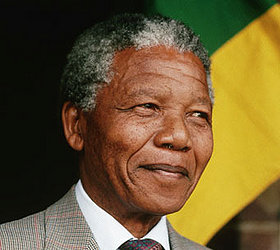 The leader of a White supremacists Mr. Mike du Toit, who plotted to assassinate former South African President, Dr Nelson Mandela and drive black race out of South Africa has been sentenced to 35 years in jail.
According to a British Broadcasting Corporation (BBC) report, the former university lecturer was last year convicted for treason over his leadership role in attempting to assassinate the former South African leader in 2002 and also attempted to overthrow the ruling African National Congress (ANC)in South Africa.

The history lecturer with a Master’s degree in philosophy and other 19 members of his Boeremag group were sentenced to jail.

The BBC report said Du Toit was found guilty of being behind nine bombings in Johannesburg and Soweto townships in 2002. The man weas also found guilty of authorizing a blueprint for revolution intended to evict black race from South Africa and established a racially pure nation.

Du Toit was the first person to be convicted for treason in South Africa since the white minority rule ended in 1994.