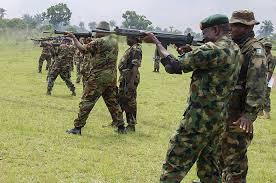 The Garkida forest stretched to the area where a convoy of three traditional rulers from the area was attacked on Friday by insurgent, in which the Emir of Gwarzo was killed.
Director of Defence Information, Major General Chris Olukolade, said yesterday that “troops deployed to Garkida responded to the attack, securing the Emirs of Uba and Askira while the body of Emir of Gwoza who died in the attack was recovered.”
The soldiers and members of the Islamic sect, according to reports are battling to gain control of the areas, hitherto in the stronghold of the insurgents.

Correspondents in Maidugiri got the report from a security chieftain in the state who pleaded anonymity.

The stop ranking military officer told correspondents that soldiers and Boko Haram fighters are, at the moment, fiercely engaging one another in battle at at Zhur forest close to Sangere, a Fulani settlement.

Boko Haram militants had earlier been reported to have had field days in terrorizing villagers in the areas including travellers some routes in Borno and Adamawa route.

Zhur forest and Sangere villages are located in the southern part of Borno state, about 235 kilometers from Maiduguri, the Borno state capital, which also has a history of robbery operations in the past.

Already, there is panic in Garkida town, making residents to scamper for safety while military personnel were being dispatched to calm frayed nerves

The officer said, “We have soldiers in Garkia, but you know the people have never experienced the sound of war. They are all afraid. We blocked the road so that people do not get entangle or rush to unsafe places. GSM Networks had been showdown except for GLO line to allow for communication in Garkida.”

The source said, the security operatives discovered that, the insurgents have been going from one village to another to collect money from the villagers and also force their young men to join the group or get killed.

“Last week, we received report that they went to Shaffa, although they did not cause trouble. They only collected money from some people and ask them to get more money within a period of two week otherwise they would come and run down the whole village.

“The two week would elapse tomorrow Saturday. When we heard the story that they were at Zhur with their fighters we promptly resolved to take the battle to their door step.”