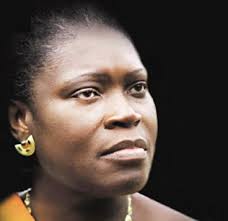 Simone Gbagbo, wife of former Cote d’Ivoire president, has been sentenced to 20 years in prison, for her role in the post election violence that country’s 2010 presidential election.

Over 3,000 died in the post election violence after Gbagbo failed to hand over power to his major opponent in the election, Mr. Alassane Ouattara,

Gbagbo’s tenure had expired since 2005 but postponed election many times and still lost the 2010 election to Quattara but refused to concede defeat or give  up power.

Despite the declaration by the Ivorian Election Commission (CEI) that the opposition candidate won with 54.1% of the vote, Gbagbo had insisted that the election was fraudulent and ordered the annulment of votes from nine regions.

Ouattara’s supporters rebelled but Gbagbo ordered a military crackdown on the people that included closure of the borders and a ban on foreign news organisations from broadcasting from within the country.

Her husband, Gbagbo, is still awaiting trial at the International Criminal Court, for charges bothering on murder, rape and persecution.