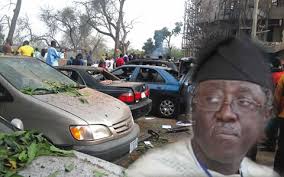 By Nuel Suji, Abuja.
The Senate on Tuesday, ordered its committee on Defence and Army to immediately investigate the killing of about 50 people during an attack by some gunmen in army uniforms, who raided some communities in  Plateau State, Saturday.

Even as the defence headquarters dismissed reporting carpeting it as responsible for the massacre.

Deputy Senate President, Ike Ekweremadu, gave the directive on Tuesday while reacting to a motion by the Chairman, Senate Committee on Drugs, Narcotics, Financial Crimes and anti corruption,  Senator Victor Lar, on the unfortunate development.

Lar, who is representing Plateau South Senatorial District, drew the attention of his colleagues, during plenary,  to the incident that had led to the destruction of five villages.

He said, “On Saturday the 2nd of May 2015, armed men wearing Nigerian Army uniform in about 11 hilux vehicles and one truck, raided Wassi local government area and, in the process, they sacked 5 villages, killed over 50 people, wounded over 100 and forced more than 20,000 people, displaced.

“The immediate cause of the attack is not known. We suspect that these are armed militias, or Boko Haram or soldiers but they are using Nigerian Army uniforms and they are using equipment that are exclusively known and  reserved for use by the Nigerian Army.

“Their operations tended to imply that they are not genuine Nigerian army personnel because they used machetes to hack down people, they shot at and killed women and children, they killed uniform policemen and civil defence personnel.

“They burnt down every house within reach and they used petrol to burn the bodies of the victims that they killed while those who survived are seeking refuge in Langtang South LGA.”

Lar argued that the incident could be likened to war crimes against humanity because the perpetrators  violated the provisions of the Geneva Convention.

He said, “The essence of making these explanation is that, when our brothers and sisters in the North-East were under the heavy yoke of insurgency and there were operation that tended to imply that it was either the army or Boko Haram, this senate took the wise decision of listening and sending a committee to investigate and report it.”

“I plead that this Senate shows the ususal understanding it has been showing in attending to the plight of members of my constituency.”

Ekweremadu sympathised with the people of Wasse Local government council over the unfortunate incident and prayed that the country would see the end of insurgency in whatever form.

He said, ” We condemn it and hope it will come to an end at the shortest possible time. Since we are not sure whether this attack came from the Armed Forces or Insurgents or armed militia.

Meanwhile, the Deputy Senate Majority Leader, Abdul Ningi, has urged his colleagues to support his call for leniency from President Goodluck Jonathan in respect of the Permanent Secretary,  Ministry of Foreign Affairs,  Ambassador Danjuma Sheni.

Sheni was suspended under an investigation for recalling the Nigeria’s envoys in South Africa without jurisdiction and without the clearance of the president who Is the Commander in Chief of the Armed Forces.

Meanwhile, the Defence Headquarters has described as false and gross misrepresentation of facts, some media reports that the Military on a revenge mission were responsible for the weekend massive killing of civilians in a Plateau village.

Over 50 persons were brutally murdered on Saturday by unknown gunmen, in military uniform, who invaded some villages in Wase, Plateau state.

The military on Monday dismissed reports blaming it as totally “false and gross misrepresentation of what happened”, declaring the “truth of the matter is that between 2 and 3 May, 2015, a combined team of soldiers of the Special Task Force (STF) carried out a raid operation to dislodge suspected militia groups habouring in villages in the borders of Plateau and Taraba states.”

“During the operation which was carried out simultaneously in Kadarko, Kunmi and Wadatan villages all in Wase LGA of Plateau State, the militia group engaged the troops in a shootout.

“In the ensuing fire exchange, 32 of the suspected militants lost their lives while soldiers sustained various degrees of injuries. 10 other militants were arrested with various calibers of weapons and are currently in the custody of the military,” the stated in a post.

The Defence hqtrs said it was public knowledge that prior to the operation, the axis had become very dangerous owing to the atrocities and sundry security breaches obviously perpetrated by the audacious militia group.

Military also indicated that the group was growing in strength and ambition, as well as expanding in scope and sphere of criminal activities, hence the urgent need for it to be checked.

“That they were also audacious enough to engage the troops means that they were already a formidable criminal gang that must be stopped,” Defence argued.

It said the clarification became necessary in the face of “mindless fabrications by those with ulterior motives” who attempted to capitalize on the unfortunate incident to syndicate their well rehearsed smear campaign against it.

It added that the operation was never a ‘genocide mission’ nor targeted at ‘innocent civilians’ “as some of the press report suggested.”

It stressed that it was a well-intended operation aimed at apprehending the ring leaders and foot soldiers of an incubating terrorist group, culminating in fierce exchanges when the audacious and dangerous group opened fire on troops.

“It must be stated very clearly that never again shall the Nigerian military allow any militant groups to rise again to constitute themselves into grave danger to innocent citizens of the country,” it further stated.