…wants Nigerians to enlist in the battle against terrorists

President of the Senate  Senator David Mark has renewed his call for tough measures against kidnappers, saying the perpetrators do not deserve to live  among normal human beings.

Mark said there was need for harsher penalty of the crime of kidnapping, adding that,  “if that is the only way to stop kidnapping, we can as well apply it here.”

Anambra, Edo and Delta state governments have already passed the law prescribing death penalty for kidnappers including destruction of their homes forthwith.

Speaking at the  funeral mass at St. Mark’s Catholic Church, Abagana in Anambra state for late Chief James Emeka Iloenyosi who died in the hands of kidnappers , Senator Mark added, ” the unabating cases of kidnapping is a big shame. If stringent measure is not adopted the perpetrators would not stop.

“It is a big challenge to all of us. Government is there to take responsibilities, but  the community cannot absolve herself of basic responsibilities. These kidnappers live among us. It is therefore incumbent on community leaders to fish them out . Today, it is  Chief  Iloenyosi , who knows the next victim tomorrow .

“If a traditional ruler like  Chief  Iloenyosi is kidnapped and died in the hands of his abductors, then who is safe in this community. That is why everybody must vow to say enough is enough and no more to kidnapping in Anambra state.”

In his remarks, the Governor of Anambra state Mr. Peter Obi promised that government would not rest until the last kidnapper is flushed out of the State.  To achieve this,  he pleaded with the people especially community leaders to  support and cooperate with government.

Responding on behalf of the family, daughter of the deceased Mrs. Ogugua  Agagbo told the bewildered congregation that the family was planning for the  Chief’s  80th birthday but unfortunately turned out to be the burial on account of his death in the hands of kidnappers.

Mrs . Agagbo said the family  has been traumatized but has equally taken the incident in good faith saying ” we are consoled that our father lived a life of service to the community which everybody attested to. ”

Earlier in his homily, Rev. Fr. Michael Anozie preached a message of forgiveness even as he implored perpetrators of all sorts of crime to turn a new leaf in order to avoid the consequences of their misdemeanor .

Also yesterday, a worried Senator Mark asked all Nigerians to be combat ready against terrorists ravaging the North Eastern states of Borno, Yobe  and Adamawa states.

Reacting to the latest attacks on Michika in Adamawa state and Maiduguri , Borno state at the weekend, the Senate President noted that the dimension of the renewed attacks have gone beyond human comprehension but “with cooperation and support of the citizenry, we can savage the situation .” 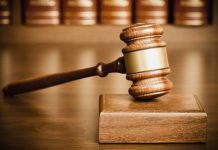