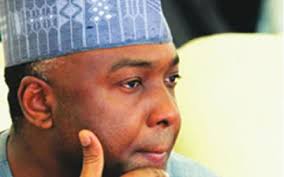 By Nuel Suji, Abuja.
The Quintessential Professionals, a group of young elites, has alleged plot by politicians opposed Senator Bukola Saraki’s ambition of becoming the next Senate President, to start a campaign of calumny against him.‎

The group,  in a statement by its Publicity Secretary,  Mr. James Bassey,  specifically raised the alarm that the faceless politicians wanted to start a media campaign that Senator Saraki was allegedly distributing dollars to senators-elect in order to buy their votes during the forthcoming inauguration of the Eighth assembly.

A claim the group said , had yet to be substantiated ‎till the time of this press statement.

The statement reads in part, “Our attention has been drawn to a malicious and wicked campaign of calumny being hatched by some politicians who are bent on frustrating the ambition of Senator Bukola Saraki, to lead the Eight Senate, as the president.

The group noted that no campaign of calumny would make the senators -elect, who had queued up behind Saraki to change their minds as they are determined to elect their own leader and had vowed to resist the imposition of anybody on them by some selfish politicians.”

The statement equally challenged members of the Senate Unity Forum to honour its  pledge to Nigerians by publishing names and signatures of the 40 All Progressives Congress senators-elect, which they claimed had endorsed Senator Ahmad Lawan, for senate president.

It would be recalled that during the last retreat organised by the APC for its Senators-Elect in Abuja, the Senators-Elect of like minds, group of senators that had endorsed the candidacy of senator saraki, came out openly to address the press and showcased their  physical identify.

The like minds group also went ahead and displayed  to the press, copy of a letter addressed to the chairman of the APC which contains all their signatures to buttress their assertion and numerical strength.

The Group, however, urged the leadership of the APC to act on the letter addressed to the National Chairman of the party, Chief John Odigie – Oyegun, last week,  by 34 out of the 59 APC senators – elect, who had endorsed Senator Saraki as the next Senate President.

It is the believe of the Professionals that if the Unity Forum could toe the line of the Saraki-led group, the truth on numbers’ playing game would be over.

The statement added, “Let the leadership of the party conduct a primary election between the two groups so that we can have a single candidate on the floor of the senate when the National Assembly will be inaugurated”.

The group noted that a divided senate will not urgur well for APC as a party, the 8th Senate and the nation at large.