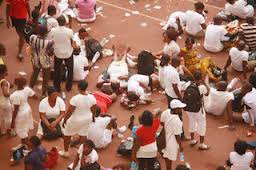 The Senate has ordered an investigation into the death of over 19 persons in last Saturday’s Nigerian Immigration Service recruitment exercise.

Similarly, the All Progressive Congress APC caucus in the Senate has demanded for the sack of the Minister of Interior Abba Morro even as it called for a state of emergency to be declared on employment.

The Upper House consequently urged the executive to come out with a marshal plan to tackle the rate of unemployment in the country.

The senate resolution was sequel to the motion sponsored  by the Chairman of Senate Committee on Interior Senator Atiku Bagudu and Senator Ahmed Makarfi.

Senator Bagudu noted with grief the Saturday 15, March, 2014 tragic nationwide recruitment exercise of the Nigerian Immigration Service( NIS) during which 15 applicants died as a result of stampede that occurred at some of the test centers across the country

Senator Ahmed Lawan ( Yobe APC) : I don’t pretend to be partisan, when they is any success by the federal government they will be a retreat and celebrated in the banquet hall and when they is a failure it is not a party affair”

Senator Olubunmi Adetunbi said: we don’t need forensic audit to know we are suffering from policy failure, our economy is not creating jobs and it’s not working. States will begin to create more jobs when some of the responsibilities are devolved to the state by the federal government ”

Meanwhile in a statement issued by the spokesman of the APC caucus in the Senate,  Senator Babefemi Ojudu said the statement becomes necessary in the light of the latest tragedy last Saturday that befell applicants who sought jobs in the Nigerian Immigration Service (NIS). That sad incident has further thrown up the deep extent that Nigeria’s unemployment problem has degenerated.

The statement read in parts :Our continued silence would deem a collective irresponsiveness of the entire Senate. But no. APC senators in the Senate are really troubled about the worsening unemployment problem, but are seriously handicapped by the proprietorial tendencies of the Nigerian leadership, to which the ultimate responsibility of solving the problem lies. Even here, there is just a little we can go in redeeming issues, as the Majority muscles the opposition at every turn in our efforts to right the so many wrongs that afflict our great country. ”

“Unfortunately, the Nigerian leadership has not exhibited any serious commitment to addressing the unemployment problem, especially in the manner it has been appropriating its budgetary priorities and managing oil revenues, and in policy implementation”

“Rather than ensure budgetary votes for areas that will impact on job creation, the leadership has been consistently allocating spending for recurrent whims that can’t drive the employment needs of any nation. And for the paltry sums that are allocated to capital projects, release of funds by the Finance Minister has always been difficult.”

“As in the past years since the current administration came into power, budgetary proposals for recurrent expenditure in the 2014 appropriation are three-quarters of the entire document. The budget is loaded with proposals for spendings that are clearly frivolous  –  the Presidential fleet, travels and trainings, Office of the Secretary to the Federation, questionable welfare and purchases of computer software and vehicles, among many others. There are also repetitions of purchases that have become a yearly affair. So while the Executive has sustained its extravagance, attention to vital areas that could address the unemployment problem has direly suffered. So the problem has been inevitably degenerating.”

“Again, oil revenues that would come very useful in creating various avenues to solve the unemployment problem are continuously being mismanaged. You are well aware of the unfolding developments on missing oil revenues and the questionable kerosene subsidy. You are also well aware of money grossly misappropriated in buying bullet-proof vehicles. These are monies that could be well applied in tackling the unemployment problem given the right leadership.”

“Where the Executive has mouthed at providing mass jobs, crass corruption, unnecessary politicking, sheer ineptitude and insincerity of purpose have made nonsense of the idea. You all know the numerous revelations that have trailed implementation of the SURE-P initiative in all the states. Where the programme should have been faithfully implemented to ease unemployment, it has been rendered another avenue to enrich members of the ruling party at the centre. Moreover, it has become one of the tools that the President has found convenient to deploy in the inordinate pursuit of his underserved re-election ambition next year. So while party officials scramble for the SURE-P spoils, unemployed Nigerians have continued to suffer.  ”

The statement also added that:”It was in the mean pursuit of undue financial gains that last Saturday’s tragedy itself happened. Employment into government agencies has always been a social service and never a mercantilist aberration. But the President Goodluck Jonathan administration has redefined the concept, giving it a new, capitalist meaning altogether. It was hitherto unheard-of that government agencies would be requesting poor, unemployed youths to pay in whatever form before they could be offered employment.”

“But it has become a norm with the incumbent administration. Considering the bureaucratic waywardness and tardiness of those in charge in government, the unemployment racket was bound to get out of hand. Where a sizable number of forms should have been given out to allow for control during interviews, those selling forms would always go for selling as many millions of forms as possible. The more thousands of naira that came in from sale of forms, the merrier. The comfort, convenience and, actually, lives of the applicants at the interview venues don’t matter. And that was what happened last Saturday.”

The tragedy has further graphically underlined the insensitivity of the President Jonathan administration to the plight of the people. In other countries, the deaths of these helpless applicants in such a circumstance would be enough for the Minister in charge to tender his resignation. We are calling on the Minister of the Interior, Hon. Abba Moro to resign his position, because he can’t be absolved from the activities that eventually led to this monumental tragedy.

“We are very worried about the worsening unemployment rate and are, hereby, calling on President Jonathan to tackle the problem sincerely and decisively by declaring an emergency on the unemployment and urgently come out with a marshall plan to tackle the problem. We would be deceiving ourselves not to admit that joblessness is an indirect effect of the spate of insecurity that is bedeviling the country all over. If the President continues to dither on addressing the problem, we are afraid the insecurity situation can only get worse.” It concluded

President of the Senate, Senator David Mark, has urged nations across the world to renew commitment and resolve to create stable political environments in which peace will thrive and end the incessant wars ravaging parts of the globe.

According to Mark “Recent political crisis in Eastern Europe and the Sub-Saharan Region are a stark reminder that we must remain ever vigilant as we strive to achieve peaceful co-existence between and within nations.

“That is why transnational platforms like the IPU must continuously seek to evolve pragmatic strategies that are capable of mitigating threats to democracy and peace.”

With particular reference to Nigeria, Senator Mark pointed out that “we face our own peculiar challenges to Democracy. That is why the main concern of the National Assembly has been the challenge to sustain democracy as a culture, acceptable and workable for the majority of our people, which takes into account the multiplicity of different ethnicities, tribes and cultures that co-exist in Nigeria.

The situation he noted, “involves managing internal tendencies, problems and issues that challenge democratic principles. This is a matter of national importance and the Nigerian parliament is leaving no stone unturned in enacting enabling laws that require the comprehensive and committed contribution of all groups and interests.
“This, to a great extent, necessitated the on-going process of the amendment of our Constitution.”

He added that ” some of the major problems currently confronting developing and emerging democracies, include but not limited to: political and electioneering conflicts, socio-economic agitations, ethno-religious crises, ethnic militias, boundary disputes, criminality and organized crimes.

“These problems individually and collectively, constitute threats to the peace, security and development of countries; they produce excruciating impact on the economy, health, education, women and children. Invariably, they have implications for the continuity and survival of the nation’s nascent democracy.

“This is the more reason why we need to explore how democracy can itself be deliberately constructed as a positive response to these issues.

“The linkage of the IPU’s mandate in the contemporary global era, remains as relevant today, as it was, at inception and it should continue to embody the earnest resolve to propagate democracy and peaceful co-existence through constructive engagements with governments and civil societies.”

This he argued entails the task of not only promoting peaceful political order but also creating the enabling socio-economic and political conditions for its sustenance.

The Senate President renewed the commitment of Nigeria to the sustenance of global peace and democracy through the propagation of people-centered legislation and oversight.

He told his colleagues: ” we have currently before the National Assembly, bills on non-proliferation of weapons of mass destruction and child’s right act to take care of stranded and displaced children during civil strife.”