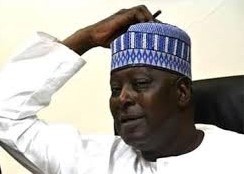 By Nuel Suji – The Senate on Wednesday moved to block the suspended Secretary to the Government of Federation, Babachir Lawal, from being reinstated, demanding for his prosecution by Economic and Financial Crimes Commission (EFCC).

Mr. Lawal is currently being investigated over allegations of violations of law and due process made against the Secretary to the Government of the Federation, SGF in the award of contracts under the Presidential Initiative on the North East, PINE.
He was earlier cleared of any wrong-doing by a panel set up by the President to review the senate’s report which indicted him.
President Muhammadu Buhari had ordered another inquiry by a panel headed by Vice President Yemi Osinbajo following insistence by the senate.
However, Senate at Plenary ‎after the consideration and adoption of the final report of its ad-hoc probe committee led by Shehu Sani‎, resolved to transfer the damning report of its Committee which called for the prosecution of Mr. Lawal to the Presidency.
It would be recalled that in December 2016, the interim report of the Senate ad-hoc committee had found the SGF of misdemeanor in the award of the controversial grass-cutting contract to his company, Rholavision Engineering Ltd, while still being its director. The company received consultancy contract to clear invasive plant in Yobe State from PINE, an intervention agency under his office.

Speaking on the floor of the senate on Wednesday, Sen. Sani alleged that PINE only spent N2m on internally displaced persons in the north-east, and that the bulk of funds earmarked for IDPs was frittered away.

He also alleged that PINE flouted the rules of procurement in awarding contracts, adding that Mr. Lawal awarded a consultancy contract to Rholavision Limited – a company he has interest in, and that most of the contract awards did not go through the Bureau of Public Procurement (BPP).

“There is a lack of transparency in the management of the humanitarian crisis in the northeast. To some it is a crisis, to others it is an industry,” he said.
The final report of the Committee which was considered on Wednesday revealed that  Lawal received at least N450 million in kickbacks from companies that got contracts from PINE.
The committee said it discovered that the suspended SGF resigned in September 2016, but that the Central Bank of Nigeria (CBN) has confirmed that he was the signatory to accounts of the company as at Wednesday, 15th February 2017.

“In the course of its investigation, the committee observed that Rholavision Engineering Limited has become a destination pool for companies that were awarded contracts by PINE and other government agencies to make payments into its (Rholavision) account no. 0182001809 with ECObank, “ Committee said.

The committee recommended that further investigation be carried out by relevant agencies of government on why contract benefiting companies paid over N500m into Rholavision Engineering Limited, a company in which the suspended SGF has interest.

“The banks transaction of Rholavision Engineering Limited and the confirmation by CBN that the Bank Verification Number (BVN) of Babachir David Lawal is still the signatory to Rholavision and 13 other accounts, some with different names. The committee is of the opinion that Lawal has contravened the provision of part 1 of the fifth schedules of the 1999 Constitution and the breach the oaths of office as SGF and therefore he should be prosecuted,” the committee stated.

The panel also said that all resources that had been misapplied or stolen by public officials should be retrieved and that anybody found culpable of contravening any of the provisions of the Public Procurement Act and the Federal government financial rules and regulations pertaining to the award of these contracts should be duly prosecuted.

It also said that relevant agencies should ensure that contracts partially executed but fully paid for must be completed by the concerned contractors.

The panel further said that since it was observed that there was no bill of quantities on most of the contracts awarded by PINE under the emergency situation, the Bureau of Public Procurement (BPP) should undertake a revaluation of all such contracts to recover any proceeds from over-inflated contracts.