By Sadiq Umar – The President of the Senate, Bukola Saraki, Tuesday referred a motion seeking to punish his leading opponent, Kabiru Marafa, to Ethics Committee, giving it a one-week deadline to report back to the senate. 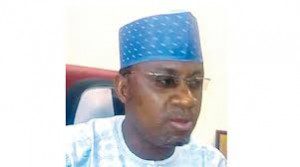 Marafa, who is representing Zamfara Central is being tried over an alleged offensive newspaper interview in which he supported former President Olusegun Obasanjo’s allegation of corruption against the senate.

In the said interview, Marafa was quoted as saying, “I agree with Obasanjo about this budget. Sharing money should not be the basis of the performance of legislators. Maybe the less they earn the better, I don’t know. But, I think whatever he is saying is right and I support him that the National Assembly should lay bare their budget”

At the Tuesday plenary, however, a Senator from Bauchi, Hamma Isa Misau had raised a point of order, alleging that the comments impinged on the integrity of the senate.

Citing Order 14 and 16 Senator Misau drew the attention of his colleague to the Interview Marafa had granted, saying it cast support for the allegation by Obasanjo against the Senate on corruption.

He argued that the interview by Marafa was misleading and that it had brought the image of the Senate into disrepute.

Misau further argued that since the interview was published, he had received not less than 500 calls and text messages from his constituents who he said were demanding the true position of things in the Senate regarding the position by Marafa.

Misau urged the Senate to take a drastic action to caution Marafa, stating, “I will not allow anyone who enjoyed the 7th Senate to cause problem. It is not good that we allow someone to continue to tell lies against us.

Another Senator, Mathew Urhohide (Edo) also spoke in support of sanction against Marafa, urging the senate to take a drastic action against him based on his remarks.

He said Marafa deserved to be sanctioned because the remarks credited to him amounted to bringing the image of the Senate into disrepute.

However, members of the Unity Forum, the anti-Saraki group in the Senate, rose in defence of Marafa, arguing that the Senate should face squarely the assignment of nation building instead of embarking on a witch-hunt.

Ahmed Lawan, a Yobe Senator who was the arrowhead of opposition against Saraki cautioned that “as a Senate, as an institution, we should be more sensitive to the way we discharge our functions and mandates as provided for in the Constitution. That is to ensure probity, transparency and accountability in the utilization of public funds.

“We are to make good laws for the orderliness and good governance of this country. That we support the executive arm of government, that is the presidency in this regard to ensure that Nigeria move out of its current quagmire that we have found ourselves,” he said.

Adding that ,“If we are able to achieve this, or in fact if we become completely committed to doing this, our image before the Nigerian public will be such massive image that every Nigerian will support the National Assembly particularly the senate. I think at the moment, we are hypersensitive to what the public feels about us because an individual senator bares his mind on an issue.

“So I will advise the Senate that instead of spending so much time on how an individual senator could say something and rubbish the entire institution, we should rather take the bull by the horn and focus on our fundamental functions and mandates.

Similarly, Senator Abu Ibrahim argued, “My belief is that Senate is such a very high institution in the democratic environment in Nigeria that we should not start limiting ourselves to the fundamental human rights of free speech. That’s my fear.

“The moment we start taking any small thing, any opinion and start investigating ourselves, we are going to shoot ourselves on the foot. Obviously, our main function requires independent vote, freedom of speech. The moment you start instilling fear among ourselves that whether the Senate will impute meanings to whatever we say, then we have to call ourselves to order.

“So I believe that our colleagues should be very careful in this kind of situation. We should consider statements according to their merits. What did Marafa say really that impinged on the integrity and the public image of the National Assembly? We have so many pressing problems in this country. We should concentrate on those issues that will move the nation forward.

“But here we are trying to cause more troubles for ourselves. If we are doing anything to our colleague, we are doing so to ourselves collectively. We will discuss the report when it is submitted. But really, I am afraid, we are going to bite our fingers if we did any contrary thing that will affect our colleague”

The Senate President, Bukola Saraki in his reaction referred the issue canvassed against Marafa to the Ethics, Privileges and Public Petition Committee for investigation.

He directed the Committee to report its finding to the plenary within the next one week.