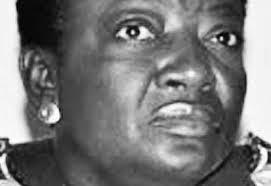 The senate has described as shocking, the sudden death of Mrs Oluremi Oyo, former Managing Director of News Agency of Nigeria (NAN).In a statement signed by Senate’s spokesman, Senator Enyinnaya Abaribe on Thursday in Abuja, the senate recalls Oyo’s contributions to media development, particularly her pivotal role in revolutionising news gathering through wire services as exemplified in her sterling performance in NAN as its Managing Director.

President of the Senate Senator David  Mark has lamented over the demise of  Mrs Oyo .Senator Mark said Remi Oyo distinguished herself as a professional and a successful administrator of very high repute.The Senate President stated:”As an Editor  she was  a pathfinder. As the President of the Nigeria Guild of Editors(NGE) she provided  exemplary leadership that took the Guild  to a higher level.“She was a great asset to the Nigerian media and a worthy daughter of the nation. We shall miss her robust and intellectual contributions to national development.”Senator Mark recalled Remi Oyo’s role as Media Adviser to former President Olusegun Obasanjo during which she exceedingly deployed her professional competence to the service of her fatherland.The President of the Senate noted that Remi Oyo would be remembered for her uncommon patriotism, honesty  and commitment to nation building.He therefore urged the bereaved family to take solace in the fact that Remi Oyo lived an accomplished life and left her positive foot print on the sands of time.“Senate is really shocked, knowing that her loss is another blow to the media industry in Nigeria coming in quick succession to other high profile deaths of notable media professionals in recent time”, Abaribe said in a statement.