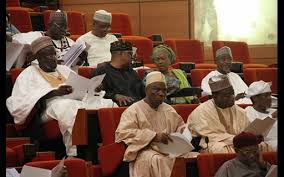 By Sadiq Umar – The Senate on Thursday confirmed the appointment of 15 out of the 27 Resident Electoral Commissioners submitted for its approval by President Muhammadu Buhari.

The confirmation followed the adoption in plenary, of the report of its Committee on Independent National Electoral Commission (INEC).

Buhari had on March 23 submitted for screening and confirmation 27 nominees for REC positions with INEC at state level.

Chairman of the committee, Senator Suleiman Nazif, while presenting the report, said all the nominees were cleared by the Nigeria Police, Department of State Services (DSS) and the Code of Conduct Bureau, (CCB) adding however, that the remaining nominees were still under screening by the panel.

In his remarks the President of the Senate Bukola Saraki, appreciated the work of the chairman and hopes the officials perform by improving the Electoral Process.

It would be recalled that the Senate had earlier suspended the confirmation exercise to protest the continued stay of Ibrahim Magu as acting chairman of the Economic and Financial Crimes Commission (EFCC).