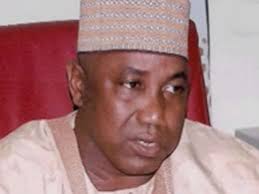 By Nuel Suji – The Senate‎ Committee on Works has recommended that Nigerians should pay N5 levy on every litre of petrol and diesel products imported into Nigeria and on non-locally refined Petroleum Products.

The recommendation is contained in a bill titled National Roads Bill‎ which was presented by Senator Kabiru Gaya, Chairman, Senate Committee on Works.

The bill was listed on the Order Paper, on Thursday, but was stepped down at the last minute.

In the bill, the Senate is proposing that toll fees not exceeding 10 per cent of any revenue paid as user charge per vehicle on any federal road designated as a toll road. The payment is not applicable to roads under the Public Private Partnership arrangement.

“Fuel levy of N5 chargeable per litre on ‎any volume of Petrol and diesel products imported into Nigeria and on non-locally refined Petroleum Produc‎ts.”

In the report obtained by our Correspondent, not all senators supported the proposal.