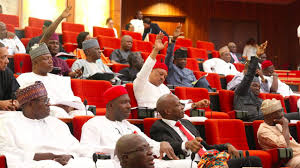 By Nuel Suji – The Nigerian Senate on Tuesday approved the 2018-2020 Medium Term Expenditure Framework, MTEF, and Fiscal Strategy Paper, even as it increased the oil benchmark from $45 per barrel to $47 per barrel for the 2018 Budget.

The passage of the report followed consideration of the Report of the Joint Committees on Finance, Appropriations and National Planning, Economic Affairs. 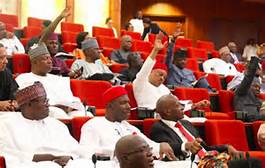 In the report submitted by Senator John Enoh (APC Cross Rivers) for consideration, the joint committees recommended the adoption of 2.3 million per barrel daily as proposed by the Executive for the 2018 budget.

The joint committees also concurred with the adoption of N305/US dollar as proposed by the executive for the budget.

The joint committees however asked the Central Bank of Nigeria to initiate measures that would close the gap between the parallel market and official exchange rate.

Senate also in agreement with the report recommended the adoption of the projected N5.279 trillion for non-oil revenue in 2018.

Senate also demanded that revenue generation agencies should intensity their revenue collections drive in order to boost the non-oil components of the revenue.

In addition, Senate adopted N1.699 trillion new borrowing for 2018 as proposed by the executive insisting that they should be on project-tied basis.

Senate added that in borrowing more, government must remain focused and ensure it is used to fund critical projects that would increase productivity and also contribute to financing such debt.

In related development, the Senate has passed the Second Reading of the 2018 Appropriation Bill.

The Bill has been forwarded to the Committee on Appropriations and its various sub-committees for further consideration and budget defence by the various ministries, departments and agencies of the Federal Government.

Speaking on the passage of the Second Reading of the Budget, the President of the Senate, Bukola Saraki said: “We know that the timetable is very tight. We will be suspending plenary for us to be able to start the defense of this budget. Committee Chairmen and Members should please ensure that we keep to this timetable.

“Let me respond with a general note of warning to all Heads of MDAs to ensure that they strictly respect the letters of invitation and the timetable. This is not time for excuses for Ministers or Heads of parastatals to be traveling and not be able to attend their budget defense.

“We do not have the time. This is a very short time frame, therefore, I expect all MDAs to be able to respect our invitation and be there on time so that the Committees can wrap up and be able to present their reports by the time we come back on Tuesday, the 19th of December,” he said.

The President of the Senate also announced that the Senate will be having a public hearing on the budget.

“Distinguished Colleagues, let me also thank you for what you have contributed to this process. I know that we have a lot of work ahead of us.

“There will be a Public hearing on the Budget. We are looking at Monday, the 11th of December, however, in the next few days, an announcement will be made – we expect attendance by all senators.”