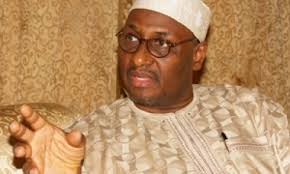 The two personalities were said to have been placed on the watch list over the alleged diversion of cash meant for arms into the 2015 election campaign and payment of huge ransom to unknown Boko Haram agents.

Also, the Economic and Financial Crimes Commission (EFCC) has said that it would not be intimidated or stampeded to release PDP National Publicity Secretary, Olisa Metuh.

The EFCC stated that since Metuh had refused to either refund the N400million traced to him or sign an undertaken to refund it, he will not be released.

Metuh will be allowed to go once he satisfies the condition for the discretion to be exercised in his favour, a source said.

A top security source disclosed that Muazu and Tukur have been under investigation in the last few months on the arms cash allegedly disbursed to them for campaign purposes and counter-insurgency initiative with Boko Haram.

The source said: “We need to interact with these two leaders, who are on watch-list. Since Muazu went for his daughter’s graduation and medical treatment, we have not been able to locate him.

“We learnt Muazu is around Singapore, Hong Kong and Malaysia axis. We are on his trail because some suspects have admitted drawing campaign funds from the ex-PDP national chairman. Over N600million has so far been traced to him.

“Tukur is believed to have been seen in the country by security agencies about three or four days ago. He might be invited over the botched deal with Boko Haram, which allegedly involved the payment of a ransom.

“He is also implicated in the disbursement of some funds for use in the Presidency for campaign and 2015 poll.”

Meanwhile, the EFCC has said that it could not be intimidated or stampeded by any campaign to release Metuh.
The anti-graft agency made its position known in a statement by its Head of Media and Publicity, Mr. Wilson Uwujaren.

It faulted National Legal Adviser, Victor Kwon for alleging compromise and witch-hunt in its management of Metuh’s arrest.

The statement said: “The attention of the Economic and Financial Crimes Commission (EFCC) has been drawn to a statement by the National Legal Adviser of the Peoples Democratic Party (PDP), Mr. Victor Kwon, alleging compromise and witch-hunt in the release of a chieftain of the All Progressive Congress (APC), Brigadier-General Jafaru Isa, (rtd) by the EFCC.

In the statement made available to the media, Kwon alleged that: ‘ The release of Jafaru Isa, a known associate of the President and chieftain of the APC, eight hours after his arrest, while our spokesman remains in detention even when the two are being investigated over same allegation, clearly shows that the President Buhari-led APC government is not fighting corruption, but using the much-hyped crusade as a cover to prosecute PDP leaders and decimate the opposition, a project the EFCC has clearly yielded itself as a willing tool.

‘While the EFCC will not wish to join issues with Kwon in this regard, it is important that the public is presented with the facts regarding the release of Isa. The APC chieftain was arrested for his involvement in the arms procurement scam, to the tune of N170,000,000( One Hundred and Seventy Million Naira).

“Upon his arrest, the retired General admitted receiving the said sum from Dasuki and immediately refunded a total sum of N100,000, 000( One Hundred Million Naira only), with an undertaking to refund the balance of N70,000,000( Seventy Million Naira only) in two weeks.

“Besides, his health deteriorated after he was taken into custody. These two factors prompted the offer of bail to the suspect.

“The grant of bail by the Commission does not amount to exoneration of the suspect.

“Unlike Isa, Metuh, who is exposed to the tune of N1.2 billion in the arms scandal, has shown no readiness to refund any amount of money to the EFCC nor signed any undertaking to do so at a future date. Metuh, contrary to claims by his party, is not being detained illegally as the commission obtained a valid court order to hold him.

“There is no basis for witch-hunt of Metuh. Nigerians are assured that he will be released once he satisfies the condition for the discretion to be exercised in his favour. Until that is done, the commission will not be intimidated or stampeded by any campaign of calumny that is intended to detract it.

“Kwon claimed rather ridiculously that : ‘We have information of the marching order from the Presidency for the immediate release of the President’s associate and that his issue is one of the major reasons for the repeated visits of the EFCC Chairman to the Presidential Villa within the period of his arrest…

“This is far from the truth. No one micro manage the EFCC, not even the President. The EFCC is focussed and will remain un-deterred in its task of ridding the nation of all forms of corrupt practices.

“There is no modicum of truth in allegations of selectivity, bias and witch-hunt and the general public is enjoined to ignore such claims.”