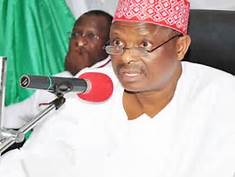 YOLA/By Tom Garba – The Senator representing Kano Central and the former Governor of Kano State, Rabiu Musa Kwankwaso has commiserated with the people of Mambila in Sardauna Local Government Arewa (LGA) over the recent clash that led to mass destruction of lives and property.

Kwankwaso, who was on a special visit to Mambilla attributed the reason for the killing to economic motivation rather than religion or political.

He lamented the large-scale destruction of lives and property, describing it as quite pathetic.

“Anyone with human feelings must feel for the people of Taraba, that’s what made me to travelled to Mambila to condoles the Governor, Emir of Mambila and people of the Taraba state.

He said that Mambila is an exceptional place with potential for investment, saying that the weather is as good as any country you can think of. With good weather and good topography for agricultural.

“It is only Nigeria that is bless with both savanna and mangrove areas and Mambila is one of the places and is never good for us that the place should be known with instability.

He promised to do his best to support those affected by the attack through the Kwankwasiya foundation.

Kwankwaso described the menace as ”an unfortunate thing” that happen to innocent Nigerians and he will do his best as a senator at the National Assembly to make sure the fight will not happen again.

”This is not the time to fight in this country, it’s time to unite, to work together for our people,” he said.

The former governor of Kano State arrived Yola, Adamawa capital where he spoke to Journalists.

He revealed that his coming to Adamawa from Jalingo is to pay respect to Lamido Adamawa who is a royal father in the north east region.

While responding to question from journalists, Kwankwaso denied that the Muslim girls being camped somewhere in the South West of the country were illegally camped, saying that any organization has the right to keep people under their Care provided their mission is genuine.

“I was the first person to collect children and provided them with all that they needed and anybody following due process can do that.” Kwankwaso added.

He also allayed fears that the ruling party (APC) is losing grip going by the senatorial bye election conducted in Osun where the party lost to PDP.

”Let me tell you, the Osun bye election was done base on sympathy of the deceased.” He added

He also said that the relationship between the legislature and executive is good and cordial, saying however that people fail to realised the independent constitutional mandate, which according to him requires that most atimes they have to lobby in order to get what they want.