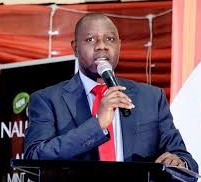 According to a News Agency report published in Premium Times, Prof. Ogunbodede, who testified before the court named Mr. Makanjuola, a former member of the House of Representatives from Kwara as one of the members who received N50 million from him as gratifications.

Mr. Makanjuola, as at the time was the Chairman, House Committee on Agriculture.

The former director, standing trial with two others, however, refused to mention names of other members of the committee, Senate members and officials of the Ministry of Finance who received the N50 million gratifications.

The report further said Mr. Ogunbodede admitted that the sum served as a thank you gesture to the NASS members and others who facilitated the quick release of N606 million, which was the school’s grant from the Federal Government.

“Makanjuola was one of the House of Representative members from the South-West on the committee who was paid the gratification,” the report quoted the ex-director as saying.

However, the former director recanted his earlier claim that he raise fund through philanthropy.

Tendering the earlier statement which Prof. Ogunbodede had made before the EFCC, Rotimi Oyedepo, counsel to EFCC, contended that the witness lied when he told the court that he raised money from the friends to execute some projects in the school.

The court also admitted in evidence many documents by various panels of inquiry that had indicted Mr. Ogunbodede.

However, Tunde Olupona, the defense counsel, opposed some of the submissions made by the prosecution.

Justice Ayo-Emmanuel adjourned the matter till April 7 for continuation of trial.

The amount was meant to pay hazard allowances of workers of the institution.

NAN reports that one other accused and his nine companies, earlier arraigned with Mr. Ogunbodede, in 2016 entered into a plea bargain and were indicted and consequently convicted.

The fourth accused, Jalekun Omitowoju, a contractor, and his companies, were allegedly conduits through which the former director embezzled the money. (NAN)