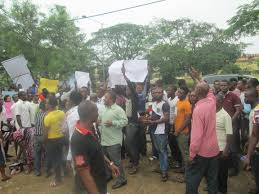 Aggrieved members of the Peoples Democratic Party from Rivers state Wednesday stormed the National Headquarters of the party in Abuja to protest last Saturday’s congresses that elected State House of Assembly candidates.

The protesters who mostly aggrieved aspirants and militants started arriving the secretariat as early as 7;30am and had taken over the entire premises even before the arrival of secretariat staff.

The protest was against what they perceived as injustice meted out to them during the primaries.

Some of them carried various placards with inscription, “Wike can’t be our Governor”; “We want clearance to contest 2015 elections”; “Give us back our money”; “We are tired of two man state exco”; “Felix Obuh must go”; “Wike has bought the soul of River PDP” and “Criminals have been cleared to be PDP aspirants in River State” among others were displayed by the protesters who clustered and sang in front of the party secretariat.

The police looked on as there was the fear that some of the militants were carrying guns and other dangerous weapons.