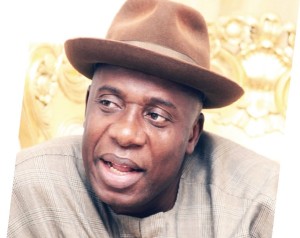 The Rivers State Chapter of the All Progressives Congress (APC) says it is about to conclude arrangements to petition the State Election Tribunal to reclaim its mandate it accused the Peoples Democratic Party (PDP) of stolen in connivance with the Independent National Electoral Commission (INEC) and the Police during the governorship polls of April 11.

Rivers APC Chairman, Dr. Davies Ibiamu Ikanya, disclosed this in a statement issued Friday afternoon in Port Harcourt. He reassured the people of Rivers State that the mandate which they freely gave to the party and to its governorship candidate, Dr. Dakuku Peterside, would soon be retrieved for the good of the future of the State.

“This brazen electoral theft by Chief Nyesome Wike and his PDP gangsters cannot be allowed to stand. These power-drunk anti-democratic elements, in their desperation for power, were not discreet in their electoral fraud that saw the allocation of a bogus over a million votes to Chief Wike. The documents and video tapes so far assembled will surely see many Rivers INEC and PDP chieftains being thrown into jail at the end of the day,” Ikanya said.

Rivers APC declared that it has an iron-cast case against Wike and PDP, saying that it is not surprised that Wike, who cannot win up to 30 per cent of the votes in a free and fair election in Rivers State, is now desperately running from pillar to post in a bid to prevent APC from going to the Tribunal.

“We wish to appeal to our members and the entire people of Rivers State to remain calm and resolute as the party goes to the Tribunal to retrieve their stolen mandate. Our case is as clear as daylight, as even Prof. Wole Soyinka, Ambassador John Endwistle of the United States of America, the European Union Electoral Observers and other international bodies have since testified that the elections purportedly conducted in Rivers State were a sham,” Ikanaya stated.

He said that Wike’s fate had become sealed by the failure to burn the INEC Office in Port Harcourt and with it the evidence of his bare-faced electoral fraud.

“With this development, Chief Wike will now join the league of Sir Celestine Omehia who spent only four months as Governor of Rivers State before he was sacked by the Supreme Court in 2007. This is a case which we shall pursue to a logical conclusion not only to retrieve our stolen mandate but to ensure that the plot of sharing Rivers State Federal Allocation among the ten main key actors of PDP in the State does not materialise,” Dr. Ikanya further stated.

SSA on Media and Public Affairs to the State Chairman, APC Rivers State.