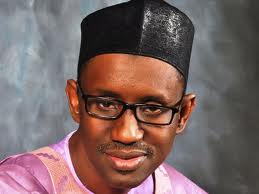 By Olusegun Emmanuel, Abuja.Former Chairman of the Economic and Financial Crimes Commission, EFCC, and chieftain of the the opposition All Progressives Congress [APC] Mr. Nuhu Ribadu has joined the Peoples Democratic Party [PDP], dumping the platform where he contested the 2011 presidential general elections.Ribadu was the presidential candidate of the defunct Action Congress of Nigeria [ACN] in 2011 and until his defection today considered one of the presidential prospects of the APC in the 2015 presidential election.

Ribadu’s membership of PDP was confirmed today amid reports that he had formally registered in his ward as a member in Yola.

The resolve by Ribadu to join the PDP has however put paid to days of speculations that about his intention to run for the governorship election in Adamawa state on the platform of the PDP.

The removal of the governorship election in Adamawa state has necessitated, a bye election to be held in the state, whereas he is to contend in the race with the Acting Governor of the state, Fintiri who has already picked a nomination form