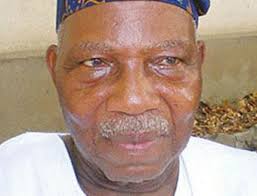 By Victor Remi-Ade – Weeks after his resignation and consequent withdrawal of same, facts have emerged that the real reason why the Afenifere leader, Chief Reuben Fasoranti resigned was due to the activities of some notable members of the organization including an elected government official.

The old Afenifere leader, known for his spartan discipline life was said to have been shocked and disturbed by a revelation that a few elements within the group had pass off on its name to engage in money making deals without his knowledge.

Fasoranti had in a recent letter announced his resignation from the umbrella Yoruba socio-cultural group, hinging his decision to resign on the disloyalty of members of the group.

It was however learnt that the Akure Chief took the decision based on the infamous role played by some of his members during the re-election campaign of former President Goodluck Jonathan.

Sources told News Investigators that some young tucks who wanted the group to effectively pursue the Yoruba cause had reached out to some top notchers of the then Goodluck Jonathan government to push the South-West agenda as a precondition to support his reelection.

The agenda, according to the source, included the implementation of the national conference resolutions and giving relevant appointive positions to the zone, having earlier complained that the zone was marginalised.

Late Special Adviser to the ex-president Goodluck Jonathan, Mr. Oronto Douglas was said to have brokered the deal with the Afenifere elements just as Ijaw leader, Chief Edwin Clark was later drafted in to further give it the needed firmness.

This was later followed up by a visit of the Afenifere leaders to Jonathan in December 2013, where the group thanked the president for accepting the confab idea. Shortly before, a Lagos-based Pastor had pleaded with Adebanjo, Chief Olaniwun Ajayi and Fasoranti to re-admit a popular South-West activist who left the group in controversial circumstances for rival Afenifere Renewal Group (ARG), loyal to Asiwaju Bola Tinubu.

However it was learnt that the activist alleged seized the opportunity of the group’s rapport with the presidency to make stupendous wealth, acquiring an expensive house in Magodo, a state-of the art printing press, radio station and fleet of vehicles. His line was said to have been toed by a former senior government appointee who was said to have collected lots of foreign currency, during one of his visits to Abuja.

Also, the elected official who is a big shot in the Ondo/Ekiti axis, who had earlier distanced himself from the group made an emergency return, and seized the opportunity to fool the presidency that he would deliver south-west votes to make huge money.

More worrisome to the Yoruba leader, it was gathered was the fact that one of those involved was close to him. This was said to have left him frustrated hence his decision to throw in the towel as Afenifere leader.

Meanwhile, Afenifere is believed to be happy with the latest ministerial portfolios given to Yorubas in the Buhari cabinet.

Speaking on the issue, a chieftain of Afenifere, Alhaji Moshood Adegoke Salvador said he was in the dark about Fasoranti’s resignation.

He hinged this on the fact that the group was always in the vanguard of issues affecting the Yoruba race.

Salvador, a former member of the House of Representatives charged the South West to support Ministers from the zone in view of the strategic ministries they currently occupy.