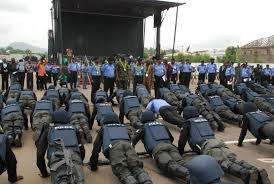 News Investigators/ The Police Service Commission (PSC) has approved the appointment of two Deputy Inspectors-General of Police (DIGs) and promotion of 427 senior police officers.
The Head of Press and Public Relations of PSC, Ikechukwu Ani, said this in a statement on Friday in Abuja.
He said the commission had also, approved promotion examinations for police officers in line with the Public Service Rules with effect from 2023.
Mr. Ani said the decisions were highpoints of the 15th Plenary Meeting of the Commission presided over by its acting Chairman, Justice Clara Ogunbiyi, (rtd)
He said the newly appointed DIGs were Bello Sadiq, currently, Assistant Inspector-General of Police (AIG) Zone 1, Kano and Dandaura Mustapha, AIG Zone 4, Makurdi.
Mr. Ani said Sadiq was appointed to fill the vacant position of DIG, Force Intelligence Bureau (FIB).
According to him, Mr. Dandaura, whose appointment takes effect from Oct. 20 will be replacing Sadiq who is expected to retire from the service on the said date.
He said the promotion of 12 Commissioners of Police (CPs) to the next rank of AIG were also approved by the commission.
Mr. Ani said the newly promoted CPs were Egbetokun Adeolu, Emienbo Assayomo, Christiana Cookey, Evelyn Peterside, Eboka Friday, Adesina Soyemi, Asafa Adekunle and Edward Egbuka.
Others are Janet Agbede, Oruebo Daso, Olokode Olawale and Abutu Yaro.
Ani said 57 Assistant Commissioners of Police (ACPs) were also promoted to Deputy Commissioners of Police (DCPs) while 60 Chief Superintendents of Police (CSPs) were promoted to the rank of ACPs.
He said 286 Superintendents of Police (Sps) were promoted to CSPs.
The PSC spokesman said the commission also, approved the setting up of 11-Member Police Promotion Examination Board.
He sad the board would have a representative of the Nigeria Police Force who must not be below the rank of DIG.