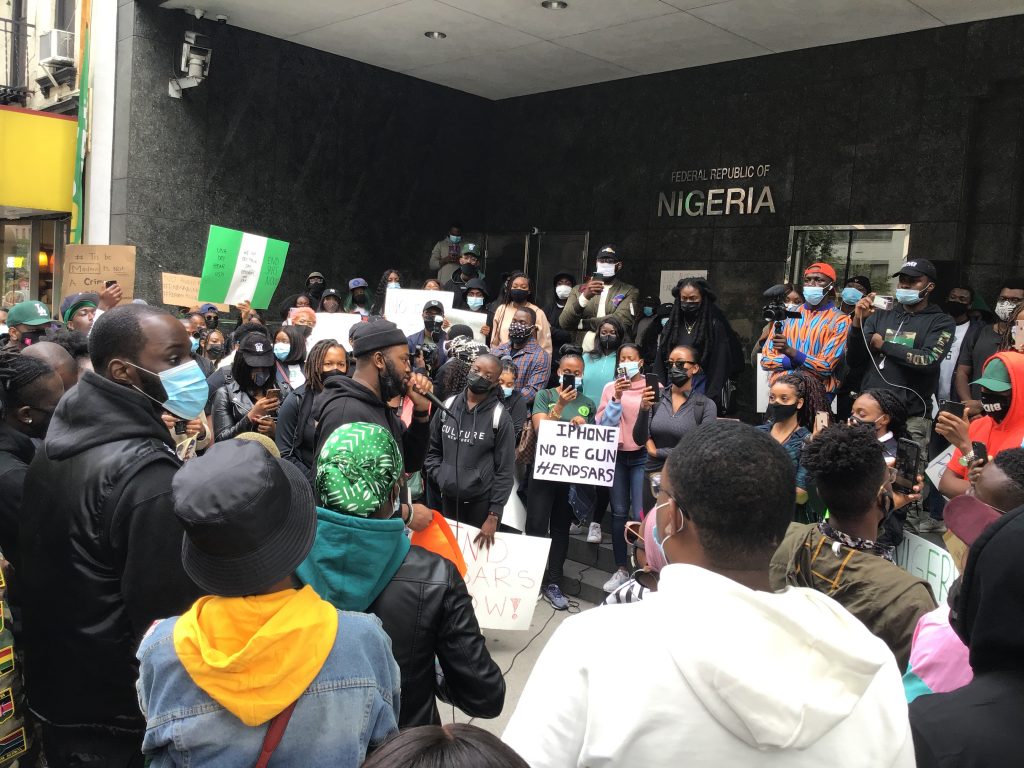 News Investigators/ Hundreds of young anti-SARS protesters on Sunday stormed the Nigeria House in New York demanding transparency in the disbandment of the police unit back home.

Among them was Stephen “Papi” Ojo, the artist, model and choreographer who stole the show as the ‘blue-guy’ in Beyoncé’s “Already” music video.

The protest started shortly after the Inspector-General of Police, Mohammed Adamu, announced the dissolution of the Federal Special Anti-Robbery Squad (F-SARS).

Mr. Adamu also announced plans for a new arrangement to address anticipated policing gaps following the disbandment, and the constitution of an investigative team to probe the alleged cases of rights violations, among others.

But the protesters, who bore placards with different inscriptions including, “We no want audio ban”, said they were not buying it.

They argued that previous commitments announced by the force to change the behaviour of SARS operatives and other personnel had no effect.

“We are not buying that because they told us in 2017 that SARS had been banned from a lot of things, but they continued,” said Miss Omobolanle Adams, of the protest organisers.

“We want President Muhammadu Buhari to speak directly to us. We want justice for people that were murdered, raped and assaulted.

“We want the SARS operatives responsible brought to book and at the end of the day, we don’t want them redeployed to other units. We want them gone,” she said.

In a series of tweets on Friday, the president assured Nigerians of his determination to end police brutality and bring “erring personnel to justice”.

Buhari said his administration’s “determination to reform the police should never be in doubt”, and sued for calm.

He blamed the bad reputation of SARS on some bad apples, noting that most police officers were committed to protecting Nigerians.

Another leader of the protest, Peter Johnson, reiterated that there was no transparency in the reported dissolution of the outfit

“They gave us a very generic message. I, personally, feel like we need to see actual results.

“We need to see a plan of where the operatives are going, because people are still going to die,” he said.

Addressing other protesters, ‘Papi’ Ojo said he relocated to the U.S. at the age of 11, and was afraid to visit home because he had lost two uncles to SARS.

However, the 23-year-old said the unity and courage displayed by Nigerians in the protest had given him strength to return and make a change.

“As I speak, I am still afraid, but I can’t keep living in fear any more because I have relations back home calling me to help.

“So, I am begging everyone here that is afraid like me to stand up and help in whatever way we can to effect the desired change back home,” he said.

The News Agency of Nigeria (NAN) reports that some of the protesters took turns to narrate their personal experiences or those of their family members in the hands of SARS.

Being Sunday, the consulate was closed and no official was around to address the protesters.

The Consul General of Nigeria in New York, Benaoyagha Okoyen, did not answer the phone when NAN called to get his comments.

He had also not replied text messages sent to him as of the time of filing this report.NAN