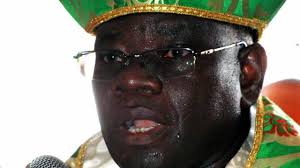 Retired Primate of the Anglican Church of Nigeria and former President of the Christian Association of Nigeria CAN, Peter Akinola has been kidnapped.

Primate Akinola was waylaid and taken away by unknown gunmen today at his Peter Akinola centre for youth training at Onijanganjangan, along old Lagos/Abeokuta road at about 3 o’clock  in the afternoon.

The centre where Akinola was kidnapped is a charity home for the training of youths in various technical and vocational skills.

The news of his kidnapped has sent jitters to residents of Abeokuta especially the christian community who were on last minute preparations for the Christmas celebration.

This incident occurred barely 24 hours after the state government donated 50 additional patrol vehicles to the security agency in the state.

The governor of Ogun state Senator Ibikunle Amosun while announcing the donation had sounded warning to criminals to stay away from the state, particularly at the border areas saying there would be no hiding place for them.

When contacted, the Police spokesman in Abeokuta, Muyiwa Adejobi said official statement would be issued on the development.