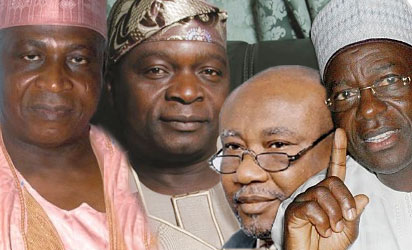 Former spokesman of the breakaway faction of the Peoples Democratic Party, Mr Chukwuemeka Eze, has said governors the decamped PDP governors who are now leaders in All Progressive Congress APC, have perfected strategy to ensure President Goodluck Jonathan did not get a second term.

President Goodluck Jonathan had last week dismissed the defected governors as inconsequential, saying the ruling party did not miss them.

But Mr. Eze in a statement issued in Port Harcourt today said the governors had vowed to frustrate any moved by President Jonathan to secure a second term in the country.

“Prepare for political war come 2015 as the ex-PDP Governors, working in concert with other democratic forces in APC, are battle-ready to send him and his directionless PDP packing from the Presidential Villa in Abuja so as to rescue Nigeria from the doom towards which Jonathan and PDP are inevitably leading the country to,”Eze said.

He however did not state the level of influence the opposition governors are still wielding within the ruling party.

“We have noted President Jonathan’s claim made last Thursday at the National Executive Committee (NEC) meeting of the PDP in the federal capital, to the effect that PDP is not missing us, as well as his boast that some of us cannot win even our wards during elections,” Eze quoted the governors as saying.

The former PDP Governors described Jonathan’s claims as “both shocking and ridiculous, saying, “he wouldn’t have been President today if not for our sacrifices which ensured that he won both the PDP presidential primaries and the 2011 presidential election.”

According to Eze,“It is on record that Rivers State under Amaechi’s watch made Jonathan’s presidency possible by delivering over two million votes in his favour during the 2011 presidential polls. For the same Dr. Jonathan to turn around, only three years down the line, to describe Governor Amaechi as a political lightweight who cannot win his ward speaks volumes about how ungrateful and uncharitable a man he is,” Eze said.

The former factional PDP spokesman berated PDP for commending and congratulating President Jonathan on his handling of the security challenges facing the country, including the Boko Haram insurgency.

“By commending President Jonathan at a time when he has proved to be completely overwhelmed by the security challenges confronting Nigeria, PDP has demonstrated without any reasonable doubt that it has lost its sense of value, which explains why it is celebrating a clueless and spineless President who watched helplessly as insurgents took away and has kept over 200 innocent schoolgirls, and who continues to watch as Nigerians are slaughtered like chicken on a daily basis.

“It is unfortunate that PDP should be commending a sleeping, confused and misguided Presidency without showing any sympathy for the wanton killing of innocent Nigerians by outlaws. PDP should hide its ugly face in shame. Nigerians should get ready to oust this ruthless party that has brought hardship and shame to our country, come 2015.”