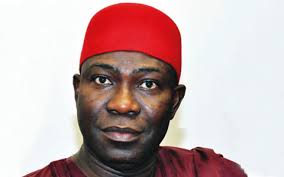 Facts emerged on Sunday that Deputy Senate President, Sen. Ike Ekweremadu  has been summoned for interrogation over his alleged role in the criminal alteration of the Senate’s rules prior to the election of presiding officers of the Senate on July 12.

Ekweremadu who emerged as the Deputy President of the Senate in the election is now being accused of spear-heading the alteration of the rules secretly in order to circumvent its hitherto provision which allows open-ballot system of voting.

He has been summoned to appear on Monday before the Inspector General of Police at the Force headquarters to answer questions relating to the accusation in a petition written against him.

Already, the Peoples Democratic Party (PDP) had raised an alarm over the invitation by the Police, saying the Deputy Senate President knew nothing about the accusation for which he is been summoned.

PDP’s National Publicity Secretary, Mr. Olisa Metuh, at a briefing on Sunday said, “Senator Ekweremadu was not in any way involved in the process other than being nominated for the position of the Deputy Senate President and could not have been privy to the secret ballot procedure adopted by the National Assembly bureaucracy, which has been widely adjudged as transparent and credible,” he said.

Metuh, who confirmed the Police invitation to Ekweremadu, accused the All Progressive Congress (APC) of plotting to use police to arrest him.

PDP said the ruling APC would stop at nothing to achieve their aim to remove Ekweremadu from his position as deputy president of the senate.

According to PDP, the Inspector General of Police, Solomon Arase, has invited Mr. Ekweremadu to report at the Force Headquarters in Abuja on Monday after which he would be detained.

Metuh said the APC leadership is not happy with the emergence of Ekweremadu, a PDP member, as the Deputy Senate President and that after several attempts to make him resign, has now resorted to underhand tactics.

“We are aware that some APC senators opposed to the emerge of Senators Bukola Saraki and Ike Ekweremadu as Senate President and Deputy Senate President respectively met last week and concocted a petition accusing the Deputy Senate President of altering the Senate Rules on the process of election of the Presiding Officers, upon which the police via a letter dated July 1, 2015 and signed by the Deputy Inspector General in charge of criminal investigation at the Force Headquarters has invited him to appear tomorrow, Monday, July 6, 2015 where he will be detained and put under pressure,” he said .

PDP argued that apart from the fact that the Nigerian Constitution clearly guarantees the two chambers of the National Assembly the powers to regulate their proceedings without external interferences, the alleged petition by the APC senators who he said enjoy the sympathy of some APC leaders, lacks merit.

The party said Ekweremadu or any other senator-elect could not have been involved in the alleged manipulation of senate rules prior to the inauguration of the Senate and the election of presiding officers, saying it was strictly done by the bureaucracy under the Clerk to the National Assembly.

“Senator Ekweremadu was not in any way involved in the process other than being nominated for the position of the Deputy Senate President and could not have been privy to the secret ballot procedure adopted by the National Assembly bureaucracy, which has been widely adjudged as transparent and credible,” he said.

The party alleged plots by certain officials at the Independent National Electoral Commission, INEC “to alter some electoral documents and records in order to create the impression that Senator Ekweremadu did not file proper documents for the general elections to eventually pave way for his removal

“In line with the above plot, the APC has been having secret meetings with some judges and lawyers to procure injunctions to prevent Senator Ekweremadu from playing his role as the Deputy Senate President.

“We are also aware that part of the plot is a conspiracy to tarnish Senator Ekweremadu’s image and open him to public ridicule.

“Last Monday, some APC leaders met in Abuja to perfect a plot to blackmail the Deputy Senate President by planting outlandish publications against him in the media,” Metuh said.

The PDP spokesperson said the Nigerian government and APC leaders should be held responsible should any harm come upon the Deputy Senate President or any of its leaders.

PDP further alleged of plots to compromise security around the Deputy Senate President to make him vulnerable and open for sponsored violent attacks.

“We do hope that the era of political assassination is not about to return to Nigeria and that our nation will not descent into a draconian regime where a strike force is created to hunt key opposition figures
“We call on our citizens to note that the PDP will not consider it a mere coincidence if our key leaders suddenly become victims of terror attacks or are suddenly killed by armed robbers,” he said.

“The APC is indeed in the process of elevating violence, ethnic and sectional interests once more in our democracy and we call on patriotic Nigerians across the country to resist this dangerous design

“We are aware that President Buhari, who had earlier restated his willingness to work with anybody elected by the legislature, has been put under intense pressure resulting in his statement on the emergence of Senator Ike Ekweremadu, which is now being misconstrued by some of his overzealous party members and security officials.

“We therefore urge the President to bear in mind that the onus therefore lies on him to moderate the political temperature of the country by calling his overbearing party members and security officials to order,” the party added.