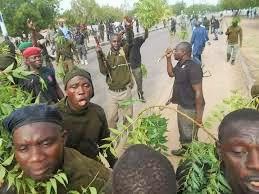 News Investigators/ The police has rescued a three-month-old baby and seized sophisticated weapons from bandits in Zamfara.

The Commissioner of Police in the state, Ayuba Elkanah, made this known during an interview with newsmen in Gusau on Wednesday.

He said that the victims were abducted from Ruggar Tudu village in Bungudu Local Government Area of Zamfara.
Mr Elkanah revealed that the police operatives also arrested three suppliers of hard drugs to bandits, and recovered some items from bandits.

They include one motorcycle, eight AK-47 rifles, one General Purpose Machine Gun (GPMG), one Rocket launcher, and five magazines.

While giving an update on the activities of the police in the last four months, the police commissioner said the State Police Command has recorded tremendous successes in the ongoing war against banditry, kidnapping, cattle rustling, and other crimes in Zamfara.

According to him, the police operatives also recovered 69 cows from bandits in the last four months.

This is even as he reiterated the ban on the use of fireworks in Zamfara with a warning that the police would not spare any person found culpable.

To ensure a hit-free yuletide season, Mr Elkana assured the people that the police would work in collaboration with other agencies to ensure adequate security in the state.