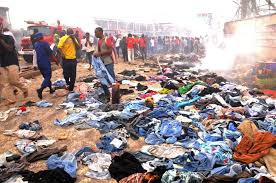 The Yobe State Police Command on Sunday confirmed seven persons dead in the suicide bomb attack at a motor park in Damaturu.

The State Commissioner of Police, Mr. Marcus Danladi, who confirmed the casualty figure said 32 others were injured and have been evacuated to the main hospital in the town for treatment.

The Command also said a female suicide bomber carried out the attack.

The female suicide bomber was said to have arrived the busy motor park in a car that sped off after dropping her.

Attack by young female suicide bombers have become rampant in the northeast states.

Only recently, security agencies warned of possible bomb attack by young girls that would camouflage in hijab during polls.